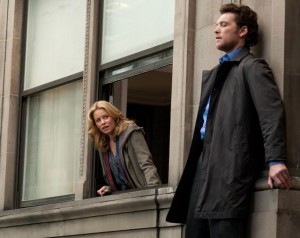 He was living on nothing, just clinging to the belief that he’d land a break. He wasn’t that unlike Nick Cassidy, the character he plays in his new film, “Man on a Ledge” — a fellow at the end of his tether, taking one shot at redemption by stepping out onto the ledge of a New York hotel, drawing attention to his plight even as he schemes to use that attention to mastermind a robbery that will clear his name.

Worthington, a rising star in his native Australia, got his Hollywood big break when he was cast in the James Cameron-produced and -directed “Avatar” in 2009, which led to him being cast in the franchise Cameron started — “Terminator Salvation.” He could afford to move out of the car.

“I’ve moved up, a bit. Bought an American car — a Chevy Avalanche, something big, obnoxious and amazingly tough. Sends a statement, right?”

Yes, it does, a statement that’s in line with much of Worthington’s big-screen work. The movies have always needed actors able to play larger than life — from John Wayne to Charlton Heston to Bruce Willis, men of action who could stand in front of something epic and not have the movie swallow them whole. Worthington is filling that bill today.

He’s making “Avatar” sequels. He’s in “Wrath of the Titans” in March, another 3-D spectacle set in Greek mythology. It’s no wonder that The Village Voice’s Nick Pinkerton nicknamed him “Sam ‘Mr. Greenscreen’ Worthington,” after the effects background Worthington does most of his acting in front of.

“I never get offered romantic roles, mate,” he says, mocking his image. “I was griping about that to my agent the other day. ‘Show me the romances, the musicals.’ I thought it was the haircut (he’s often crew-cut on the screen). But I’ve got a mullet in “Man on a Ledge,” just to change things up. Still no romance offers. Didn’t work out.”

“Mr. Greenscreen” is getting some chances to mix it up. He co-starred in the romantic drama “Last Night” with Keira Knightley, and stood out in a formidable ensemble in the complex Nazi-hunting thriller “The Debt,” which opened to great reviews last summer.

“I just pick movies that I’d pay to go and see. Whether they’re $200 million spectacles, or this little $10 million movie (“Drift,” about the birth of modern surfing) I just finished in Australia. As long as the story interests me and I think other people would be interested in seeing it, I sign on.”

And since he’d loved “The Negotiator” and “Phone Booth,” films involving life and death haggling and bargaining between two principal characters in crisis, he grabbed “Man on a Ledge.”

“It’s another variation on that stand-off negotiation sort of tale. Very simple premise — a man standing on a ledge, desperately trying to proclaim his innocence, making this stand he’s taken his Alamo. His do or die moment. Stepping into the persona of a guy like that fascinated me and felt like my sort of acting adventure.”