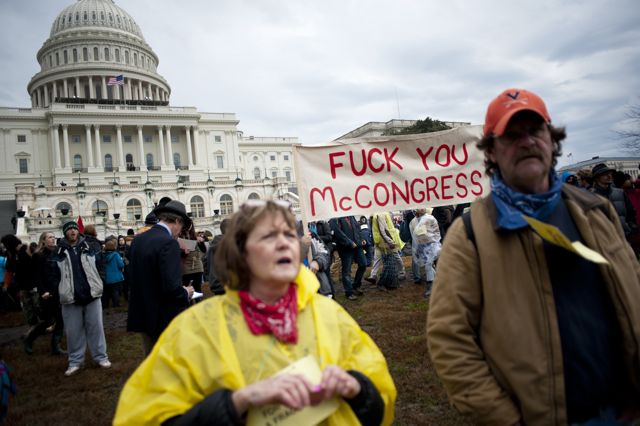 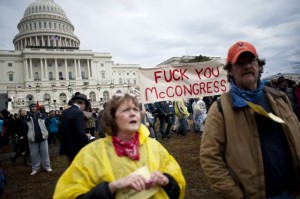 WASHINGTON — Protesters from across the nation rallied Tuesday on Capitol Hill under the banner of the grassroots Occupy movement, saying they came to Washington to greet Congress as members return to work after a holiday recess.

(PHOTO: Hundreds of members of the “Occupy” movement from across the country participate in the Occupy Congress rally on Capitol Hill, calling on lawmakers to have a greater focus on alleviating income inequalities, Tuesday, January 17, 2011 in Washington, D.C.)

“This recharges the Occupy movement,” said Camilo Brokaw, a protester from Albuquerque, N.M. “This is a giant scientific testing ground for all of the different parts of the movement to come together and see what each group has been doing.”

A group calling itself Occupy Congress organized Tuesday’s event, using social media to draw other protesters aligned with the Occupy movement from across the country.

Protesters filled the Capitol lawn wearing costumes, holding signs and playing music. While the Occupy movement remains leaderless, without any official spokespeople or party lines, a central goal of the day was to bring together people from across the country to create concrete plans for the group.

“We’re gaining support because our message is true,” said Shamar Thomas, a U.S. Marine Corps veteran who gained notoriety for his diatribe against police brutality at Occupy Wall Street in October.

“Thank you for coming to view your oppressed citizens,” yelled a protester to a number of congressional officials gazing out from the steps of the U.S. Capitol. “This is what happens when you don’t do your jobs.”

The Occupy movement, which has its roots in the first Occupy Wall Street rally in Manhattan in September, has come under criticism for its lack of focus and organization. But protesters were quick to attribute its success to precisely that.

“I think that’s been their strength, having respect for all different kinds of points of view,” said Sharon Pio, of Washington. “This is really the smartest thing I’ve ever seen, when I think about it.”

But such diversity of opinion creates divisions within the group. Just after 1 p.m., the crowd was split between protesters on the lawn in a “general assembly,” going through an agenda of events for the day, and a larger group at the edge of the lawn, chanting at the police who barricaded them from the paved walkway.

Following the protest at the Capitol, groups of demonstrators marched to nearby congressional offices to break into smaller groups and speak with their respective representatives.

A final march in the evening at was expected to go from the Supreme Court to the White House, where a candlelight vigil was to be held. The protesters’ permit was to run out at 11 p.m. EST, when they would be removed from the Capitol Hill lawns.