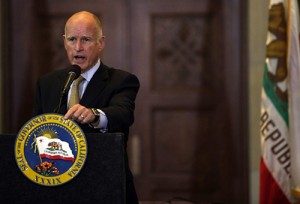 SACRAMENTO, Calif. — California Gov. Jerry Brown, calling on lawmakers and voters to help him prove “the declinists about California are wrong,” on Wednesday launched his campaign for higher taxes and urged billions in spending on infrastructure and schools.

First in his State of the State address at the Capitol and then at a second address at Los Angeles City Hall, Brown said he will “press ahead” with his ballot measure to raise the state sales tax and income taxes on California’s highest earners.

Already, the effort was afoot: Less than two hours after his State of the State address, advisers flying with Brown to Los Angeles said he would start collecting signatures for his tax initiative immediately. State officials cleared the measure for circulation just hours earlier.

The State of the State address — and the start of an uncharacteristic, two-day swing through media-rich Southern California — had all the hallmarks of a campaign’s beginning. The Democratic governor said the tax measure is “fair,” framing the initiative as a choice between higher taxes and schools.

“Given the cutbacks to education in recent years, it is imperative that California devote more tax dollars to this most basic of public services,” Brown told a joint session of the Legislature. “If we are successful in passing the temporary taxes I have proposed and the economy continues to expand, schools will be in a much stronger position.”

“I was really looking forward to hearing some fresh ideas, some innovative ideas and some real leadership,” said Assemblywoman Beth Gaines, R-Roseville. “Unfortunately, I didn’t hear that. … Raising taxes is not going to help our economy.”

Brown, delivering the second State of the State address of his third term, called California a state “on the mend,” despite its lingering financial problems.

He said substantial budget cuts will also be necessary, however.

“It is said that the road to hell is paved with good intentions, and digging ourselves into a deep financial hole — to do good — is a bad idea,” he said. “In this time of uncertainty, prudence and paying down debt is the best policy.”

Far more expansive than last year — when Brown was focused almost exclusively on the budget — Brown’s 20-minute address was reminiscent of the wide-ranging speeches he gave during his first stint as governor.

He called for pension changes and less state testing in public schools.

He said a peripheral canal or other ways to move water through or around the Delta is “an enormous project” he will undertake, and he reiterated his support for California’s beleaguered high-speed rail project, urging a skeptical Legislature to approve the start of construction in the Central Valley this fall.

Brown called the $98.5 billion project a “wise investment” for a growing state.

He argued that efforts to build solar, wind and geothermal energy projects will eventually pay off in job creation and other economic benefits for the state.

“It is true that the renewable energy sector is small relative to the overall economy, but it pays good wages and will only grow bigger as oil prices increase and the effects of climate change become more obvious and expensive,” he said. “In the beginning of the computer industry, jobs were numbered in the thousands. Now they are in the millions. The same thing will happen with green jobs.”

Accompanied by senior advisers, including his wife, Anne Gust Brown, Brown boarded a Southwest Airlines flight almost immediately after speaking. His stop in Los Angeles was followed by a meeting with teachers in Burbank, before scheduled events today in Irvine and San Diego.

The trip is a departure for Brown, who traveled infrequently last year.

Last year, he worked for months to negotiate a tax deal with Republicans in the Legislature, and he spent most of his time in meetings at the Capitol. But those talks failed, and the 73-year-old governor is now turning directly to the electorate with a ballot initiative to raise taxes. He is expected to campaign throughout the state ahead of the November election.

Brown told the invitation-only crowd at Los Angeles City Hall, including former Gov. Gray Davis and philanthropist Eli Broad, that he was in Los Angeles because “the business of government is not just under the Capitol dome,” though a bank of television cameras in the back pointed to another reason a politician might visit L.A.

At the Capitol, the reaction of Republicans was evident before Brown even spoke. Assembly Republican leader Connie Conway criticized it in a response video mistakenly posted online Tuesday, hours ahead of time.

“Republicans were eager to hear his ideas for the many challenges facing our state,” she said in the video. “Unfortunately, the governor’s vision is centered around one thing: higher taxes.”

Brown chastised Conway and Senate Republican Leader Bob Huff at the beginning of his speech.

“I noticed that Connie and Mr. Huff put out their critique of my speech 24 hours ago,” he said. “I’ll let you in on a little secret: My speech wasn’t finished 24 hours ago.”