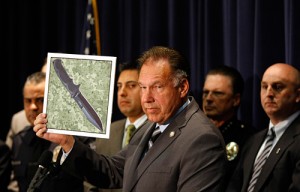 SANTA ANA, Calif. — He would select the homeless men and then hunt them down, prosecutors said, waiting for the perfect moment to end their lives.

(PHOTO: Orange County District Attorney Tony Rackauckas holds up a photo of a 7-inch knife, similar to the one he says was used by Itzcoatl Ocampo, the man accused of the serial murder-spree of four homeless men, during a press conference in Santa Ana, California, Tuesday, January 17, 2012.)

He hung out at the same library in the Orange County town of Yorba Linda as one of his alleged victims, scrolling through job listings on the computer. And he stalked his final alleged victim after seeing the man’s photo in an article about the homeless killings in the Los Angeles Times, authorities said.

After he was arrested, detectives said they found evidence that 23-year-old Itzcoatl “Izzy” Ocampo had already selected future victims.

“He wasn’t done with the killings,” said Orange County District Attorney Tony Rackauckas, who didn’t specify how investigators were certain that future victims had been targeted. “We know that he had selected others and why … He appeared to like the press coverage.”

Orange County prosecutors Tuesday outlined their case against Ocampo. The former Marine from Yorba Linda was charged with murder with special circumstances, making him eligible for the death penalty. Ocampo, who is being held in isolation on a psychological watch, is scheduled to be arraigned Wednesday in Santa Ana.

His attorney, Randall Longwith, said he was finally allowed to see Ocampo on Tuesday afternoon, and only then after getting a court order.

“They indicate he sleeps most of the day,” Longwith said. “He was curled up in a ball under a blanket in underwear, no shirt, no pants. He looked like a wet cat — a scared, wet cat. It wasn’t much conversation.”

Members of Ocampo’s family said they can’t believe he’s the killer, adding he was generous to the homeless and frequently gave food and money to panhandlers.

But prosecutors accuse Ocampo of a “serial thrill kill spree,” outlining each of the killings in graphic detail and saying the attacks became more furious and violent.

The first killing occurred around 8:15 p.m. on Dec. 20 when he walked into a Placentia strip mall wearing a dark sweat shirt with a hood pulled over his head, prosecutors said. They said he approached James McGillivray, 53, who was homeless and lying behind the complex.

Ocampo kneeled on McGillivray’s chest and stabbed him more than 40 times in the head, neck, and upper torso, continuing the attack even after his victim stopped struggling, prosecutors said. A surveillance camera, installed just two days earlier by a property management company, captured the attack, which proved “key to the case,” Rackauckas said. The body was found the next morning.

Prosecutors said Ocampo had planned the murder in advance, as he did with the next victim, Lloyd Middaugh, 42, who was taking shelter under a bridge by the Santa Ana River in Anaheim when he was attacked just before midnight on Dec. 27. He was found the next morning with more than 50 stab wounds to the head and torso, prosecutors said.

Three days later, 57-year-old Paulus “Dutch” Smit arrived at the Yorba Linda Public Library, where he was a well-known face.

Smit’s daughter, Heather Smit-Rayo, said her father called her just after 3 p.m. that day sounding upset. He told her his bicycle, which had his bedroll and medications, had been stolen while he was at the library reading an article.

Authorities told the family they believe Ocampo stole her father’s bicycle before killing him. Late that afternoon, Smit’s body was found near the library with more than 60 stab wounds.

Similarities between the killings led investigators to suspect a single attacker was responsible, and a task force involving local authorities and the FBI was formed.

Roadblocks were set up, and twice — in Placentia on Jan. 10, and in Yorba Linda three days later — Ocampo drove through them without arousing suspicion, his manner calm, authorities said.

Prosecutors said he appeared to drive through the police checkpoints deliberately, the last time just hours before his arrest.

Police blanketed the region, warning the homeless to seek emergency shelter and to stay in packs. Many heeded the warnings.

John Berry, 64, who had camped for months along the Santa Ana River in Anaheim, was one who did not. “I’m not too worried,” he told a Times reporter who accompanied police on a ride-along as they warned the homeless to be cautious. Berry said he didn’t like to stay in shelters and had friends to look out for him. I feel like God will take care of me — it’s all in God’s hands,” he said.

Berry’s name and photograph ran in the Jan. 7 edition of the newspaper, which Rackauckas said the killer used to select him as a victim.

“The evidence is going to show in this case that the defendant specifically sought out this victim for participating in this article, that he relished the media attention of the crime, and he stalked the victim until he got his prey,” said Rackauckas. He held up a copy of the paper and pointed to the story with Berry’s photo.

Berry had called Anaheim police in the days before his death, saying he felt like someone was following him, said Anaheim Police Chief John Welter.

“It’s unfortunate that we did not get to him before the suspect did,” Welter said. He said police were receiving hundreds of tips and leads, and “there were literally hundreds of police officers around the county searching for” the killer.

Ocampo approached Berry at about 8:15 p.m. on Jan. 13 near a Carl’s Jr. restaurant and stabbed him repeatedly, the top prosecutor said, calling it the “most brazen” of the attacks.

Witnesses called 911, and bystanders chased Ocampo into a nearby mobile home park, where police arrested him with blood on his hands and face, prosecutors said.

Nearby, they said, investigators found a single-edged, 7-inch KA-BAR Bull Dozer knife that Ocampo is believed to have used in the killings. The knife could sever bone “without chipping or breaking the blade,” the top prosecutor said.