Obama’s new chief of staff an expert on executive powers 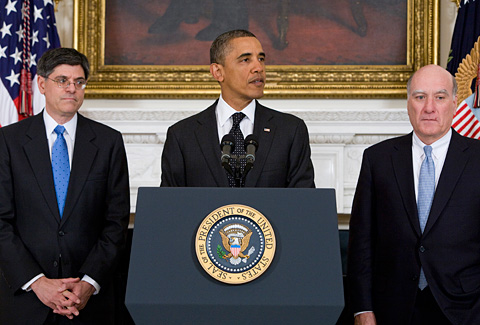 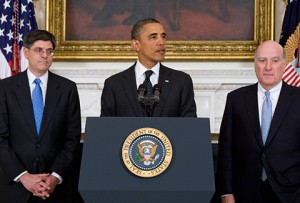 WASHINGTON — With the appointment of Jacob Lew as his new chief of staff, President Barack Obama chose a Washington veteran who is well-liked on Capitol Hill, but — just as important for dealing with hostile Republicans in an election year — is also an expert on the executive powers Obama can use to advance his agenda without lawmakers’ cooperation.

(PHOTO: President Barack Obama announces the resignation of White House Chief of Staff William Daley, right, and his appointment of Jacob Lew, left, the current director of the office of management and budget, as his new chief of staff in Washington, D.C, on Monday, January 9, 2012. )

Lew, who replaces William M. Daley, steps into the role after a year of fierce partisan battles that saw Obama’s policy goals largely stalled in Congress. More and more, the president relied on executive orders to enact small pieces of his economic, education and housing proposals.

Lew is skilled in such practices. For two different presidents, Bill Clinton and Obama, he has headed the Office of Management and Budget, whose mission includes putting in place rules and regulations that don’t require congressional approval.

As Obama’s fourth chief of staff, he’ll be positioned to carry out the White House’s pivot away from engagement with Congress in favor of unilateral action. The approach jibes with a re-election strategy that includes running against a deeply unpopular Congress.

“Clearly, since Labor Day, there has been this turn from talking to (House Speaker) John A. Boehner and (Senate Republican leader) Mitch McConnell all the time — Velcroing themselves to Congress — toward using all the tools of government to move the agenda forward,” said John Podesta, who was chief of staff under Clinton and worked closely with Lew.

“All the executive orders and initiatives and regulations move through OMB, and Jack is extremely experienced with that. He’ll be able to shape and guide all the assets of the government to move the economy forward for the middle class.”

Obama’s appointment of Lew fits a pattern of hiring chiefs of staff suited to the needs of his presidency at a particular time.

Rahm Emanuel, the consummate Capitol Hill dealmaker, got the job when Obama was intent on moving an ambitious legislation through a Democratic-controlled Congress. After Emanuel left to run for mayor of Chicago, longtime Obama adviser Peter Rouse stepped in on an interim basis. The more conservative Daley was hired partly in hopes of improving Obama’s rapport with the business community.

Lew is far different from his predecessors. The famously profane Emanuel consolidated power in his office and had a hand in virtually all aspects of the White House operation. Daley had a political persona of his own, as a former commerce secretary under Clinton and a member of a famous political family in Chicago.

The even-tempered Lew is more in the mold of a traditional government aide.

A former White House aide said that after Lew arrived as director in 2010, he “brought a stability and an adult-in-the-room approach. He had experience and had been there before. He’s calm, level-headed and respected.”

The former aide spoke on condition of anonymity to speak more candidly about White House personalities.

Lew, who served as an aide under former House Speaker Thomas P. “Tip” O’Neill, leans toward the liberal end of the political spectrum and is not reluctant to take a stand, according to people who know him.

After he became OMB director two years ago, Lew and some other Obama advisors met privately in the office of Larry Summers, a top economic adviser, to discuss ways to jolt the economy. No one in the room was certain of Lew’s position, and whether he might oppose new spending for fear of ratcheting up the deficit. But he sided with those calling for more temporary stimulus measures.

“He’s quiet and a mild-mannered guy, but if you really want to see him fight, put him in a position where he’s protecting disadvantaged people and he’ll go to the mat,” said Jared Bernstein, a former economic adviser to Vice President Joe Biden. “That’s something you don’t see enough of at that level of power.”

Lew, 56, worked in Hillary Rodham Clinton’s State Department before moving to OMB. He and his wife, Ruth Schwartz, contributed $9,200 to Clinton’s presidential campaign in 2007-08, according to disclosure forms filed with Congress. He gave $2,300 to the Obama campaign at the end of August 2008, after Clinton dropped out of the Democratic primary fight, the forms show.

Before joining the Obama administration, Lew worked at Citigroup for three years, earning $945,000 for his work in 2008, according to disclosure forms filed when he was nominated to head OMB. The forms also show he held between $50,000 and $100,000 in state of Israel bonds.

A native of the Forest Hills neighborhood in Queens, N.Y., Lew is an orthodox Jew who keeps kosher and observes the Sabbath: Between sundown Friday and Saturday, he doesn’t drive, use electricity or work on his BlackBerry.

One aide recalls Lew walking to work at the White House on Saturdays. Lew is available to Obama should the president need to reach him during that time, according to the White House.