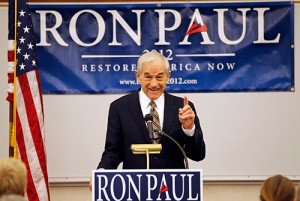 WEST COLUMBIA, S.C. — Ron Paul, fresh from his second-place finish in New Hampshire, treated an adoring and cheering South Carolina crowd to a lesson on how to bring the nation back to what he said are the core constitutional principles of a dramatically scaled-down federal government.

“We had a victory for the cause of liberty last night,” he said.

The Texas congressman told the crowd of about 350 people in an aviation hangar near the Columbia Metropolitan Airport that his support was expanding beyond “a tireless irate minority.” “We’re marching on. The numbers are growing. They grew exponentially in New Hampshire, and they’re going to grow contagiously here in South Carolina,” he said.

Paul promised to be “very, very busy” before the Jan. 21 primary, but headed home while other candidates continued to ricochet around in search of television airtime. His national campaign chairman said he probably will not return until Sunday.

When Dr. Mike Vasovski, the campaign’s state chairman, introduced Paul, he noted that the last time Paul was in the state, at a GOP debate in Spartanburg, he got just 89 seconds. “Today, he’s going to get all the time he wants,” he said as a crowd of about 350 erupted in cheers.

Paul, wearing a suit and red-white-blue-and-silver-striped tie entered holding hands with his wife and trailed by a few family members. Many strained on their tip-toes to snap cell-phone photos of the candidate and one hoisted a poster that said: “Ron Paul is Electable.”

“We did have an exciting evening last night,” he said. “Anybody watch TV at all?”

On a stage before a Ron Paul banner and between a U.S. flag and South Carolina’s palmetto tree and crescent moon flag, Paul said his campaign was all about protecting liberty and ending a century-long “slipping and sliding away from the Constitution.”

“We need something different, but we don’t need anything brand new,” he said.

Paul also outlined his view of limited foreign engagement, saying, “This country should never go to war unless a war is declared, win it and come home.”

He said he would audit the Federal Reserve, triggering cheers of “End the Fed.” “We’re going to break up their monopoly and all their bailouts of their friends on Wall Street,” he said.

If banks are pushed toward bankruptcy by risky investments, such as foreign debt, then, Paul said, “Well, that’s what they should do. They should all go bankrupt.”

Chris Barczak, a 41-year-old real estate appraiser from Columbia, described his views as libertarian, but said he had never voted for a Republican for president. He has been volunteering and working phone banks for Paul, who caught his eye four years ago. He said he opposed the wars in Iraq and Afghanistan and wants to end foreign aid.

“Let these countries deal with their own issues,” he said. “It gets us in trouble by sticking our noses in other countries.”

Barczak, who did not serve in the military, but whose father is a Vietnam veteran, held a poster that said: “U.S. Troops Support Ron Paul.” “I think it’s important that we send a message that the military’s behind him,” he said, then added, “I just grabbed one, actually.”

Paul said during his speech that he has the most support among the candidates from active military personnel. At Fort Jackson, near Columbia, there are more than 3,500 soldiers and about 12,000 family members. The state also has a large number of military retirees.

Michelle Woods, a 41-year-old mother who brought her five children, said she supported Paul because he wants to return American to the principles it was founded on. She was wearing a shirt with stars and flags and a Statue of Liberty and words such as “America” and “Liberty.”

“He’s not afraid to say what is right,” she said, cradling 9-month-old Michael in her arms. “I think that the way our founding fathers created the Constitution is not where we are now and we need to get back to that.”