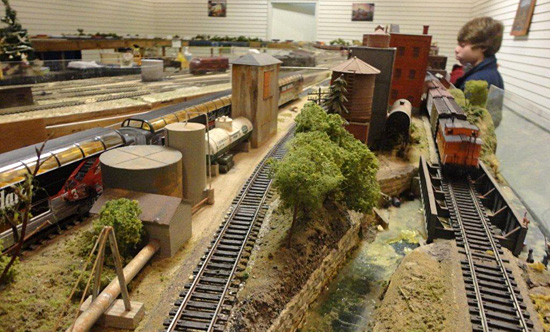 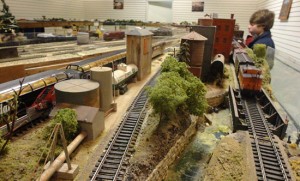 A young family eagerly approached the model railroad display near Younker’s at Southbridge Mall, making train sounds and sharing excitement at the amazing mini world stretching out before them.

“This is amazing. I wish I had something like this at my home,” said Casey Cerny of Clarion. “It’s beautiful. You can tell they put a lot of work into this, and time and money,” said Cerny’s brother, Rego.

The two were among scores of shoppers who stop by each day to see the model railroad display at the mall.

Setup began in November, said Bill Campbell, who was working the controls on Monday. The previously award-winning display had been in the basement of the mall, he said.

Members of the former North Iowa model railroad club used to take the display on the road, Campbell said, setting it up at competitions in La Crosse, Wis., Albert Lea, Minn., and Boone, Iowa.

Membership has dwindled so the club is on a side track. The enchanting display has been set up at the mall in years past – one time for just a few days until a storefront was leased, Campbell said.

“People have been asking about getting it going again,” he said of the club, but no meetings are scheduled.

“I like it,” said 3-year-old Evan Hagen, who viewed the train display from atop his dad’s shoulders. They peered at the tiny likeness of a cop with a dog, apparently in pursuit of a criminal suspect in the inner city.

The railroad display drew praise from kids of all ages. And best of all – no overbearing horns or lengthy, irritating delays from blocked intersections.
Are there ever any crashes?

Campbell smiled. “Yup. Some did the other day.”

“They don’t stay on the tracks all the time,” he said. “They come apart, run into each other. But they’re running well today.”