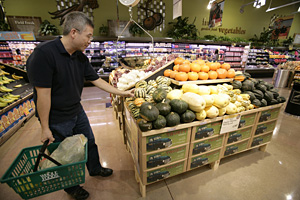 Meyer goes to Whole Foods for produce and specialty items, Jewel-Osco for staples and Trader Joe’s when he needs to really stock up. He says he is not particularly brand-loyal and is susceptible to impulse buys.

(PHOTO: Daniel Ing looks over squash at a Whole Foods in Ann Arbor, Michigan, in October 2011. As more men take on the household grocery shopping duties, stores are targeting the new demographic.)

“I walk in and go with the flow of the store, going aisle by aisle,” he said. “I like to walk through all the aisles even if I don’t think I need anything there, because sometimes something will catch my eye.”

Meyer is part of a growing contingent of men taking over grocery duty. Experts say the trend has been building slowly for decades. But the recession hit men disproportionately with layoffs and left many of them home to manage the household.

The nation’s biggest food and personal-products manufacturers are taking notice, attempting to market products and adjust store layouts to cater to men. It’s a paradigm shift for the $560 billion retail food industry that has patently referred to the primary customer as “she,” focusing marketing and advertising firepower on women, and mothers in particular — sometimes making fun of dads in the process.

The female focus isn’t lost on Meyer, who works as a brand manager for Bimbo Bakeries USA.

“It does kind of bother me that the focus seems to be toward moms and women in general,” he said. “It seems obvious the target should represent more people.”

Men ages 18 to 50, including Generation X and millennials, seem more than happy to do the shopping — or at least tag along.

“I don’t live with a girlfriend or anything,” said Judson Eakin, a 25-year-old concert promoter. “But even if I did, I wouldn’t just send her” to grocery shop.

Eakin splits his shopping between nearby markets, bigger runs to Aldi for staples and trips to Jewel for higher-end items. He eats at home every day and considers cooking “a big hobby,” searching FoodNetwork.com for recipes with five-star reviews for inspiration.

According to consumer-research firm GfK MRI and an ESPN report, 31 percent of men nationwide were the primary household grocery shoppers in 2011, up from 14 percent in 1985.

Some estimates are higher. A nationwide survey of 1,000 fathers conducted by Yahoo and market research firm DB5 released early this year said 51 percent were the primary grocery shoppers in their household. Of that group, 60 percent said they were the primary decision-makers regarding consumer package goods, which includes packaged food.

“We’re seeing more men doing grocery shopping and more young dads cooking with their kids as a way to bond with them at home,” said Phil Lempert, a supermarket consultant. “It’s very different from the whole metrosexual phenomenon of six, seven, eight years ago, but a much more down-to-earth (approach), not trying to show off, but trying to be part of the family.”

Brad Harrington, executive director of the Center for Work and Family at Boston College, said “men on the homefront are where women in the workplace were 30 years ago,” in terms of how they are portrayed on television and even in advertisements — namely, as disengaged or incompetent.

“If we portrayed women like that in the workplace, there would be an outcry,” he said.

But change appears to be under way.

Cincinnati-based Procter & Gamble Co. began testing “man aisles” in 2009 and is expanding the program into some Wal-Mart, Target and Walgreens stores as well as other chains in the U.S. and Canada in 2012.

As a result of focus groups and shopping alongside men, the company found that “many men were terribly uncomfortable with the shopping experience,” P&G spokesman Damon Jones said.

“Our intent in creating guy aisles was to give them an experience that was comfortable for them and made it easier to navigate the store,” he said.

In many stores, men’s personal-care products were scattered across different aisles, often in subprime locations like a bottom shelf or the end of an aisle, Jones said. Men had little patience searching for lotion and body wash, especially when weaving through contingents of women and teenage girls.

The man aisle puts all men’s products, including P&G competitors, in one place, with shelf displays and even small TV screens to guide men to the appropriate skin-care items. Jones said the tests have gone well, with men spending more time in the aisles and, ultimately, more money.