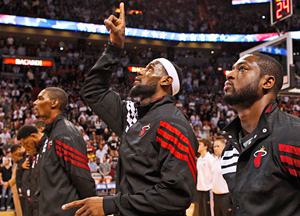 MIAMI — The scoreboard broke during crucial minutes of the fourth quarter on Sunday at AmericanAirlines Arena. It was pretty much the only thing rusty about the Heat’s first home game in six months.

(PHOTO: The Miami Heat’s Chris Bosh, LeBron James and Dwyane Wade, right, on the court as the Miami Heat play host to the Boston Celtics at the AmericanAirlines Arena in Miami, Florida, on Tuesday, December 27, 2011.)

The Heat and Celtics treated fans to a brilliant display of early season basketball despite both sides only two games into a schedule delayed and truncated by the lockout. In a rehash of the playoff meeting between the rivals, the Heat was pushed but never seriously threatened, defeating Boston 115-107.

The sellout crowd, juiced for the return of basketball, made it feel like a playoff game. The Heat dominated for long stretches in the first half and third quarter but the Celtics cut the game to three points with less than two minutes remaining. With that, all the old, familiar feelings came rushing back into the arena: tension, excitement, suspense.

But then, a new face stole the show.

Heat rookie point guard Norris Cole scored nine straight points in the final three minutes of the game to stave off the Celtics. The reserve from Cleveland State sparked his own rally with 3:15 left when he absorbed a charge from Brandon Bass, who outweighs the young firecracker by 75 pounds.

Cole lay on his back and pounded his fists in excitement. Cole, an obscure name from the Horizon League on draft day, made a name for himself in his first home game.

Fans chanted “MVP!” as Cole went to the free-throw line with 9.3 seconds left and the game won. He swished both attempts to cement his storybook home debut. Cole scored 20 points, shooting 8 of 16 from the field, to go along with four rebounds and four assists.

The Celtics cut the Heat’s lead it to 10 points early in the second half but Wade and James countered with a flurry of offense that forced Boston coach Doc Rivers to call a timeout. James banked in a jumper from 15 feet with 7:02 to put the Heat ahead by 16. Then, it happened again. Just like the season opener in Dallas, a Chalmers-to-Wade-to-James alley-oop that happened so suddenly in transition that if you looked down eat a bit of popcorn you missed the best play of the game.

Chalmers stripped Kevin Garnett under the Celtics’ basket and quickly pushed it ahead to Wade, who was already rushing down the court. James was ahead of Wade, running a 4.3 40-yard dash, and soared through the air with all his freakish size and ability. Wade lobbed a perfectly weighted pass to James who finished the play with a powerful dunk.

It was the new-look Heat in all its glory.

In its first two games, the Heat has attacked the basket with a fury that borders on vengeance. James’ sprints up the court have become a staple of the Heat’s offense.

For a long while, the Heat flirted with its franchise record for field-goal percentage in a game. Midway through the third quarter, the team was shooting a staggering 69.6 percent from the floor. But the Heat cooled, the Celtics’ defense stiffened and Boston cut Miami’s lead to eight points to begin the fourth quarter.