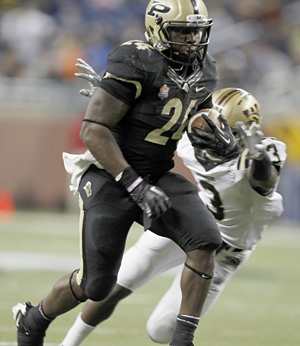 DETROIT — They had a chance, and after playing from behind much of the game and committing six turnovers, a chance is all they could ask for.

Western Michigan University had the ball, trailing by five, the game in their hands with two minutes left against Purdue University in Tuesday’s Little Caesars Pizza Bowl.

(PHOTO: Purdue running back Akeem Shavers picks up a first down in the fourth quarter against Western Michigan in the Little Caesars Pizza Bowl at Ford Field in Detroit, Michigan, on Tuesday, December 27, 2011. Purdue held on for a 37-32 win.)

But two plays into the Broncos’ final drive, Carder fumbled, Purdue recovered and that was the game — a 37-32 Boilermakers victory in front of 46,177 at Ford Field.

The Broncos had run out of chances.

“Their effort was unbelievable,” Cubit said. “I thought our kids showed a lot of heart.”

They did, battling their way back in the game from 16 points down but falling short in their attempt to win their first-ever bowl victory in five tries.

Purdue’s speed, strength and special teams were too much.

The Boilermakers hit Carder early and often, forced seven WMU turnovers, recovered two of their own onside kicks, withstood a record-setting game by Broncos wide receiver Jordan White, and earned their first bowl victory since winning the Pizza Bowl in 2008.

But the Broncos didn’t fade away, took the hits in stride and battled to the end in a bowl game that Cubit promised afterwards wouldn’t be their last.

Carder thought they were going to win.

Cubit thought they were going to win.

“I’ll be honest with you,” he said. “When we stopped them at the end, I really thought we were going to win, it would be a happy ending, we would walk out with the trophies and everybody would be happy.”

But the Broncos didn’t win. So it was a happy ending instead for Purdue, which walked out of Ford Field with the 2011 Little Caesars Pizza Bowl trophy after a 37-32 victory.

And Western Michigan’s seven turnovers — four interceptions and three fumbles — were as much of a reason for the loss as the speed and size of their Big Ten opponents.

The Broncos didn’t do a good job of holding onto the football — senior wide receiver Jordan White aside — and their comeback bid was officially busted with less than two minutes remaining, down by a score, 70 yards away, with the fans on their side, when Carder couldn’t hang onto the football.

Purdue’s Ryan Russell hit him from behind — the last of many hits Carder would take on the night — Carder fumbled, and Bruce Gaston recovered to end the Broncos’ quest for a first-ever bowl victory.

“I’m very proud of our football team for making this happen,” Purdue head coach Danny Hope said. “We talked about it at length since we became bowl-eligible: about making sure we had a winning season and a successful season. There’s a big difference between 6-6 and 7-6.”

And that difference was most evident in the special teams.

Halfway through the second quarter, after Carder connected with Josh Schaffer for a 1-yard touchdown pass to put the Broncos up, 15-10, a pair of kicks changed the balance of the game.

First it was Raheem Mostert sprinting 99 yards virtually untouched, to “daylight, a touchdown and the end zone.”

Then it was Carson Wiggs, who delivered his second onside kick of the game — and recovered it himself.

Less than two minutes later, Purdue’s Reggie Pegram scored his second touchdown of the game to put the Boilermakers ahead for good.

And less than two quarters later, after slicing a 16-point deficit to five, Carder fumbled, Purdue recovered and Jordan White’s remarkable sixth-year senior season was over.

“I feel like this year we had all the pieces to the puzzle,” White, who caught bowl records of 13 catches for 265 yards and added a touchdown, said. “We just didn’t make it happen.”

The game looked promising from the start, when Carder hooked up with White on a flea-flicker for a 49-yard touchdown to give the Broncos an early lead, but turnover after turnover, coupled with Purdue tacking on point-after-point, made the deficit insurmountable.

And although WMU earned its first bowl berth since 2008, and although they vowed this bowl game would be different, White summed up his final collegiate game with red eyes and two words: