Gingrich may be too arrogant for Iowa 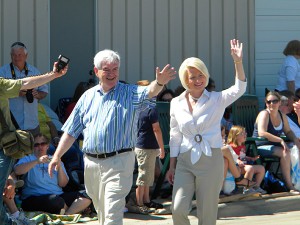 DES MOINES, Iowa — With a rich trail of utterances, Newt Gingrich has outlined an opinion of himself that ranges from lofty to stratospheric.

In 1985, Gingrich told The Washington Post: “I have enormous personal ambition. I want to shift the planet. And I’m doing it.” In 1994, he told The Atlanta Journal-Constitution: “People like me are what stand between us and Auschwitz.” Just the other day, at the Iowa statehouse, he gave himself credit for helping defeat the Soviet Empire.

As Gingrich seeks the GOP presidential nomination here, where the first ballots of the 2012 nominating contest will be cast Jan. 3, Iowans are weighing his long experience, conservative credentials and their hope that he is the Republican who could best President Barack Obama rhetorically.

But his occasionally apocalyptic self-regard is running counter to another Iowa interest: modesty. Gingrich heard about that last week from Jenny Turner, a 31-year-old wedding videographer in southeast Iowa.

“You did an ABC interview where you said ‘I am gonna be the nominee.’ I have been for you, and have been a big fan,” Turner told Gingrich when he and his wife stopped to chat with voters at the Hy-Vee supermarket in Mount Pleasant. “But that felt a little bit presumptuous.”

Gingrich, whose considerable personal baggage has forced him to master the art of seeming remorseful, didn’t flinch.

“It was a mistake,” he said. “I used to be an analyst at Fox and every once in awhile a reporter will ask me an analytical question and I will forget, I am not an analyst, I’m a candidate.”

(To some, this amounted to the same kind of faux-pology he issued in March when he blamed his own bad behavior — an adulterous affair with his current wife, Callista, while prosecuting President Bill Clinton for an adulterous affair — on “how passionately I felt about this country.”)

Achieving common-man authenticity is Gingrich’s great challenge, said Republican strategist Mark McKinnon: “Voters want candidates who are ‘of us’ and ‘above us.’ Gingrich has nailed the ‘above us’ part. He needs some work on the ‘of us’ piece. A big part of the attraction to Newt is that he is bigger than life. But, they also have to be able to relate to him on some human level. And that’s where Gingrich has a real challenge.”

That was obvious Tuesday, when, after Gingrich finished taking questions at the Hy-Vee, he shook hands with Turner, who elaborated on her previous challenge: “I just want you to be humble,” she said. “Do you think you’re arrogant?”

Gingrich admitted that some have that opinion. But, he added, “I work very hard and I am assertive.”

But later she said she was not so sure. “I don’t know,” she said by phone. “Pride goeth before a fall.”

That could be Gingrich’s motto. In the ’90s, as House speaker, he engineered a government shutdown, in part, because he felt insulted by his seat placement during a ride on Air Force One. His tenure, which returned the House to Republicans for the first time in decades, ended as he was fined $300,000 by the House ethics committee, the first speaker ever to be punished for ethical lapses. (When he departed office in 1998 under a cloud, he called fellow Republicans who had tried to topple his speakership “cannibals.”)

Despite a near total campaign implosion last summer, Gingrich, who looks every bit the rumpled history professor he once was, managed to surge to the top of the presidential polls last month after businessman Herman Cain dropped out in the wake of sexual harassment allegations. A sustained attack by Gingrich’s well-funded rivals — former Massachusetts Gov. Mitt Romney, Texas U.S. Rep. Ron Paul and Texas Gov. Rick Perry — has now eroded his lead.

An author of numerous books, both novels and nonfiction, Gingrich is regarded by many here as the GOP field’s deepest thinker, who spouts ideas, many outlandish, the way other candidates spout talking points. In a recent debate, he said some federal judges are “grotesquely dictatorial,” and if they decline to appear before Congress to explain their rulings, they should be rounded up by federal marshals.

But the incendiary lines that wow debate audiences don’t always sit well with others. On Friday, The Des Moines Register, in an editorial excoriating Gingrich for his attacks on judges, said his “bombast is irresponsible.” Last week, when former President George H.W. Bush said he supported Romney, his description of Romney as “mature and reasonable — not a bomb-thrower” was widely interpreted as a negative reference to Gingrich. (Bush later denied it was meant that way.)

The struggle for many Iowans is that they like what Gingrich stands for, but worry about his personality.

John Thorpe, an Episcopal priest in Newton, a small town hit hard in recent years by the closure of the Maytag appliance factory and headquarters, said he likes Gingrich, in spite of his abundant self-regard.

“I’m a student of history and I can’t help but think of Napoleon,” said Thorpe, who on Thursday brought his wife, Beth, and their three small children to a Newton coffee house to meet Rep. Michele Bachmann of Minnesota, a Gingrich rival. Thorpe and his wife are undecided. “It’s not that we want a Napoleon in office, but sometimes it takes a big thinker and a big personality to do a big job.”

Both Thorpes have enjoyed watching Gingrich’s debate performances. “I will say that all of his answers begin the same way — ‘Well, your premise is wrong, you’re a moron and here’s why,’” he said. “After awhile it begins to get old, but I like his ideas so much, I’m willing to look over it.”

So are many of his Iowa supporters.

Kraig Paulsen, the Republican speaker of the Iowa House of Representatives, endorsed Gingrich on Wednesday at a news conference that made the news when it was interrupted by Occupy Des Moines protesters. (Gingrich described the outburst as “all noise, no thought” before returning to his remarks.)

Afterward, Paulsen was asked whether he thought Iowans have a problem with some of the harsher aspects of Gingrich’s personality.

“I suppose some would find it offensive,” said Paulsen, before growing exasperated. “We’re picking the president of the United States,” he said. “We’re not picking someone to invite over for dinner!”