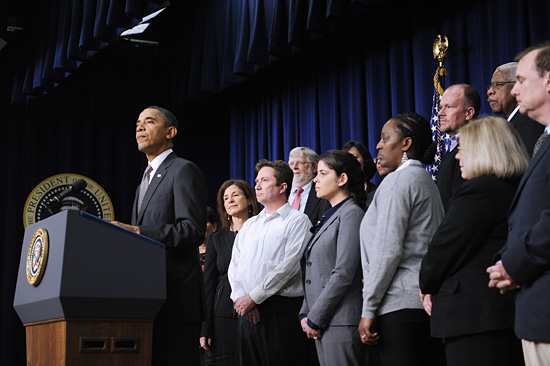 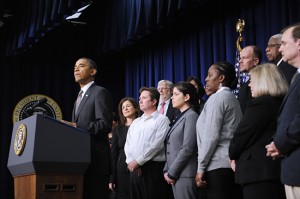 WASHINGTON — House Republican leaders, bowing to pressure from both the White House and their Senate colleagues, agreed to a stopgap measure that will forestall a tax increase on American workers that was scheduled to take effect Jan. 1.

(PHOTO: President Barack Obama speaks at a press conference in the South Auditorium of the White House in Washington, D.C., December 22, 2011, to urge House Republicans to vote on the short term bipartisan compromise passed by almost the entire Senate.)

The deal is expected to come to a vote Friday under procedures that would require all members in both chambers to agree. If any members object, Speaker John A. Boehner, R-Ohio, would call the House back into full session next week for a vote, he told reporters Thursday.

In addition to keeping Social Security payroll taxes at current levels for an additional two months, the deal would maintain unemployment insurance for people who have been jobless for an extended period and would block a cut in the payments doctors receive for treating Medicare patients. After Jan. 1, congressional negotiators would meet to decide how to extend the provisions for the rest of 2012.

Accepting the deal would mark a significant defeat for House conservatives, who in past confrontations have wrested major concessions from President Barack Obama and congressional Democrats. Those previous standoffs, however, involved efforts to reduce spending. This time, the House was in the far trickier position of appearing to oppose a tax cut, and the deal almost entirely followed the terms negotiated in the Democratic-controlled Senate.

Agreement came hours after Obama and Senate Republican leader Mitch McConnell of Kentucky, adversaries who rarely agree, both urged House Republicans to accept a bill to keep payroll taxes at their current level.

“This is an issue where an overwhelming number of people in both parties agree. How can we not get that done?” Obama said at a White House event, where he read letters from workers who detailed the hardships that a tax increase would cause. “Enough is enough.”

Earlier in the day, McConnell split publicly from his House colleagues and issued a statement saying Americans “shouldn’t face the uncertainty of a New Year’s Day tax hike.”

The House should accept the two-month extension that passed the Senate on Saturday, McConnell said.

The Senate had approved its stopgap measure with bipartisan support, 89-10. But when Boehner presented it to House Republicans last weekend, conservatives rebelled.

The impasse largely concerned how to pay for extending the tax cut for a full year. The House had rejected the Democrats’ idea to increase the income tax on millionaires, instead passing a one-year extension that covered the cost by spending cuts and new revenue. The Senate’s stopgap measure would raise fees on federally backed mortgages.

As Thursday wore on, House Republicans who had previously balked began to change their stance. One statement came from Rep. Sean Duffy, a “tea party”-backed freshman from Wisconsin, who said that he still didn’t like the two-month plan, but that the Senate had “left us with few other options.”

Failure to pass some payroll tax bill by Dec. 31 would mean an increase for the average family of about $40 per biweekly paycheck, or about $1,000 a year.

Conservatives disliked the payroll tax proposal for several reasons. It would increase the deficit and do little to help the economy, they said. And they raised concerns that because payroll taxes fund Social Security, any reduction would hurt that program’s long-term stability, even though the deal calls for the fund to be replenished. Many argued that their constituents would regard the tax increase as acceptable and would rather see taxes go up than give in to one of Obama’s legislative priorities.

But as the reality of a New Year’s tax increase began to sink in, the unpopularity of the idea became increasingly clear. Senior Republicans began warning that their party risked the kind of political damage it suffered 16 years ago with the Christmas-season shutdown of the government — a move that helped re-elect then-President Bill Clinton.

Democrats were clearly enjoying the spectacle of Republicans trying to justify opposition to a tax cut. “This is a big moment,” said Democratic strategist Stanley Greenberg, who was Clinton’s pollster. Republicans “put the spotlight on themselves” on an issue involving “money coming out of your pocket,” he said. “I don’t think it could be more powerful symbolically.”

Obama did his best to heighten Republican discomfort at his White House event, where he stood surrounded by ordinary citizens and read stories from people who had written to the White House about what a $40 cut in take-home pay would mean for them.

A teacher said she wouldn’t be able to go to the thrift store to buy pencils and books for her fourth-grade class, Obama said. A man from Rhode Island said that $40 buys three nights worth of home heating oil. A Wisconsin man wrote that he would have to give up some of the weekly 200-mile drives he makes to visit his father-in-law in a nursing home.
“What’s happening right now is exactly why people just get so frustrated with Washington,” Obama said. “This is it; this is exactly why people get so frustrated with Washington.”

Inside the White House, officials had believed all along that the payroll tax cut eventually would get renewed. Republicans would not be willing to be tagged as “the cause of taxes going up on 160 million Americans,” one senior White House official said, speaking on condition of anonymity because he was not authorized to speak publicly.
At the same time, “their handling of it seemed irrational, so it was hard to know what they were going to do,” the official added.

Republican officials rejected the “irrational” label, but agreed that their handling of the issue had damaged their cause. “It may not have been, politically, the smartest thing in the world,” Boehner told reporters, referring to his caucus’ opposition to the payroll tax bill. “Sometimes it’s hard to do the right thing.”

In the end, however, the agreement came quickly, according to White House and congressional staff who spoke on condition of anonymity because they were not authorized to discuss the negotiations publicly.

Thursday morning, Boehner called Obama and asked him to send members of his economic team to Capitol Hill for further negotiations. Obama declined, saying that the House would have to approve the Senate-passed bill first.

With his options running out, Boehner met with senior Republicans, who gave him approval to negotiate terms with Senate Majority Leader Harry Reid of Nevada. All agreed that the time had come, aides said.

In the afternoon, Boehner’s aides contacted Reid’s staff. They offered to accept the Senate plan if Reid agreed to two minor matters. One would amend the Senate bill to avoid new tax-reporting requirements that the Senate language might have imposed. The other was an agreement by Reid to appoint Senate members to a conference committee to work out a full-year deal.

Reid, who had orchestrated the successful Democratic negotiating strategy, ratified the agreement in a brief statement: “I am grateful that the voices of reason have prevailed,” he said.
———
(Mascaro reported from Washington and Nicholas from Honolulu. Kathleen Hennessey in the Washington bureau contributed to this report.)