McQueary’s testimony: ‘there were severe sexual acts going on’ 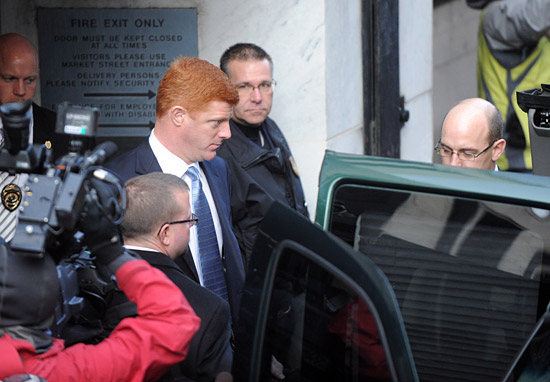 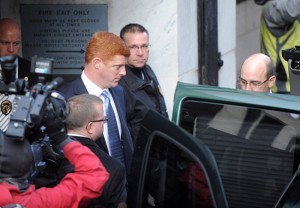 By Jeremy Roebuck and Amy Worden, The Philadelphia Inquirer

HARRISBURG, Pa. — Mike McQueary was unequivocal: When he stumbled upon former Pennsylvania State University defensive coordinator Jerry Sandusky and a naked boy in a university shower nine years ago, he witnessed something “way over the line and extremely sexual in nature.”

(Mike McQueary, center, exits the Dauphin County Courthouse in Harrisburg, Pennsylvania, after testifying, Friday, December 16, 2011, during a preliminary hearing for Tim Curley and Gary Shultz, two university officials who are accused of lying to a grand jury about what McQueary told them.)

And that, the assistant Penn State football coach testified before a Dauphin County judge Friday, was what he told two university officials — athletic director Tim Curley and then-vice president Gary Schultz — when they questioned him about the 2002 incident.

“There’s no question in my mind that I conveyed to them that I saw Jerry with a boy in the showers and that there were severe sexual acts going on,” McQueary testified in his first public statements since Sandusky’s arrest last month.

State prosecutors allege Curley and Schultz later lied to a grand jury about what they were told by McQueary, saying he had described a much milder tale of horseplay.

District Judge William C. Wenner ruled Friday that enough evidence existed to move their case to trial on the charges of perjury and failing to report what they learned to authorities.

Attorneys for Curley and Schultz said McQueary never told their clients the full extent of what he claimed to have seen on that March night.

“Had he heard from Mike McQueary that this boy in the shower was being sexually sodomized or anally raped, he would have remembered that and done something about it,” said Curley’s attorney, Caroline Roberto.

Friday’s hearing began with two hours of testimony from McQueary, who has come under intense scrutiny since Sandusky’s arrest on nearly 50 counts of sexual abuse involving 10 boys.

The hearing also provided details from the grand jury testimony of former Penn State head football coach Joe Paterno as to what he was told by McQueary about the incident.

“I knew Mike was upset,” Paterno had told the grand jury, “and I knew some kind of inappropriate action was being taken by Jerry Sandusky with a youngster.”

Paterno, who is undergoing cancer treatments and recently fractured his hip, did not attend the proceeding. Prosecutors read his grand jury testimony last year into evidence. Paterno is expected to testify at the trial.

If Friday’s proceedings are any indication, what he says then could be pivotal for Curley and Schultz.

To prove perjury, prosecutors must corroborate McQueary’s contention that he had been clear and direct with the two Penn State administrators when they asked what he witnessed between Sandusky and the boy.

Paterno, it seems, was the only other person in the room when McQueary told his story to Curley and Schultz.

When asked about the incident in court Friday, McQueary testified that he had stopped by a campus football facility to drop off a pair of sneakers when he came upon Sandusky and a boy about 10 years old in the shower.

The defensive coordinator stood behind the child with his arms wrapped around the boy’s hips, McQueary said. While McQueary — then a graduate assistant — said he never saw the genitals of Sandusky or the boy, “they were as close as they could be,” he said.

“It was very clear that it looked like there was intercourse going on,” McQueary told the court.

He looked away, but eventually, he said, peeked into the shower again to find Sandusky and the boy separated.

“I know they saw me,” he testified. “They looked directly into my eyes.”

“He was shocked and saddened,” McQueary said, recalling Paterno’s reaction. “He slumped back in his chair. He said, ‘I’m sorry you had to see that. That’s terrible. I need to tell some people about what you saw.’ “

In his own testimony before the grand jury last year, Paterno recalled McQueary’s conveying that something “sexual in nature” had occurred between Sandusky and the boy.

But prosecutors never specifically asked the head coach to describe in detail what he later told Curley or Schultz, according to the transcripts.

Instead, Paterno was asked whether he had conveyed “substantially the same information McQueary had told him.” The coach replied that he had.

Curley and Schultz contend that McQueary’s story had been substantially watered down by the time it came across their desks.

As far as he knew, Curley told the grand jury last year, Sandusky and the boy were “horsing around, they were playful, and that made (McQueary) uncomfortable,” according to transcripts of his testimony. When asked specifically whether McQueary or Paterno had mentioned the word “intercourse, he responded: “Absolutely not.”

“The allegation came across as not that serious,” he told the grand jury last year. “We had no indication a crime had occurred. I wasn’t told what was really going on.”

Those semantic differences will become key as the case heads to trial, said Roberto, Curley’s attorney, because they influenced the decisions her client and Schultz made to bar Sandusky from bringing children to campus but not to take a case to police.

“The words are extremely important here,” she said. “We need to have precision in the language.”

But prosecutors insisted that Paterno’s statements proved McQueary got his message across. And given Sandusky’s prior history of sex abuse allegations, they should have been on alert.

Thomas R. Harmon — the former head of Penn State’s police department — testified Friday his officers investigated another incident in 1998 involving allegations of Sandusky showering with a young boy. Charges were not filed in that case until last month, but Harmon told the court he discussed the case with Schultz at least four times.

Schultz, who oversaw the police department, claimed ignorance of that investigation in his testimony before the grand jury last year.

When asked whether he was aware that a nearly 100-page report on the probe was filed by university police, he responded, “Wow,” according to transcripts.

Sandusky has maintained his innocence of all the charges against him. He waived his own preliminary hearing this week and is next due in court in March.
___
©2011 The Philadelphia Inquirer