Wild battles back gallantly to make a point 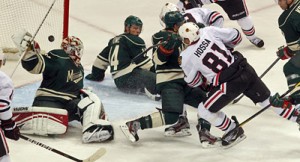 ST. PAUL, Minn. — Nobody could have predicted two months ago that a Dec. 14 nationally televised showdown between the Wild and Chicago Blackhawks would be a battle between the Nos. 1 and 2 teams in the Western Conference.

But Wednesday night, the Wild showed how it got to the mountaintop of the conference and the entire NHL.
It simply never quits.

Down 2-0, then 3-2, the Wild battled back like it has done so often this season. It eventually forced overtime but couldn’t snag that second point during a 4-3 shootout loss.

“It sucks we don’t get two points, but this is a win for me,” coach Mike Yeo said. “As far as I’m concerned, that’s a win for our guys.”

The Wild returned home from a five-game road trip less than 24 hours after playing a hard-fought game in Winnipeg. Pierre-Marc Bouchard was the latest added to the Wild’s long injury list, and then after the first period, Guillaume Latendresse was lost to post-concussion syndrome one game after returning from a concussion.

Matt Cullen and Dany Heatley couldn’t score in the shootout, but Jonathan Toews and Patrick Kane could to give the Blackhawks, two points behind the Wild, the extra point.

But in front of 19,254 strong at Xcel Energy Center, Kyle Brodziak and Cullen sparked the rally with second-period goals.

Toews scored a beauty 6:54 into the third, but the Wild again refused to cave. On a delayed penalty drawn by Darroll Powe, Cal Clutterbuck, on the ice as the extra attacker, fed Mikko Koivu for the tying goal with 5:04 left to force a frantic overtime.

“There’s two ways you can go after that,” Clutterbuck said. “You can deflate, and a lot of times that’s what we’d do last year. But it just takes one play for us.”

The Wild was playing at home for the first time since Dec. 2, and its legs were predictably mush in the first period. Blackhawks goalie Ray Emery saw such little action, he could have pulled out his iPhone and played Words With Friends. The Wild’s first shot of the game — a Marco Scandella flip from outside the blue line with 2:59 left in the first — drew a mock cheer.

In the second, Cullen blocked Brent Seabrook’s shot and took off on a short-handed breakaway. A stumbling Cullen never got a shot off because Seabrook’s partner, Duncan Keith, came from behind and clipped his skate.

Francois St. Laurent saw it as a stick check. Incensed, Cullen skated to the bench, then slammed his stick angrily across the wall while looking at the referee. St. Laurent nailed him for unsportsmanlike conduct, giving Chicago a 46-second 5-on-3. The Wild killed Koivu’s minor, but Marian Hossa scored on Cullen’s.

“I didn’t say a word,” Cullen said. “I was just upset because I felt like he missed the call, which he obviously did, and just banged the boards. Obviously, you shouldn’t do that. I’m not happy with myself for doing that.”

Less than two minutes later, Michael Frolik made it 2-0. But the Wild came roaring back. First, after an icing was waved off, Colton Gillies’ forecheck created a turnover and Nick Johnson fed Brodziak for his team-high 11th goal. Only 2:31 later, Cullen redeemed himself with the tying goal on a Clutterbuck rebound.

“Situation like that, it could be easy to write it (off) and start thinking about the next one,” Brodziak said, “but great job by the guys in the room sticking with it. We got a valuable point out of it.”