MASON CITY – A pit bull running loose in a neighborhood apparently led to a nasty confrontation and the arrest of the dog’s owner.

The incident unfolded Sunday night, September 18, at 6:55 PM, when Mason City police were called to the 700 block of South Jersey Avenue for a report of disorderly female in the street. The first time officers responded, they located the female and friends at a nearby residence and told them to stay inside with one of the residents. Officers cleared the call at 7:40 PM.

However, it seems some of the people did not stay inside after the officers left.

Additional calls came in around 8:16 PM, police tell NIT, concerning one of the earlier females arguing with a neighbor in the street. A few people were now outside yelling various threats and things appeared to be escalating even after officers arrived back on the scene. Neighbors were upset about a pitbull running loose in the area. One of the participants in the fracas, 43-year-old Stephanie Hays, was identified as the dog’s owner.

Officers tried to arrest Hays for Public Intoxication, they tell NIT. However, she allegedly resisted arrest and then spat on a police officer while she was taken into custody. She was charged with Interference with Official Acts; Public Intox; Assault on a Peace Officer; Dog at Large, No Rabies Vaccination, and No City Dog License.

As a result, the dog was taken to the animal shelter.

“Things seemed to quiet down after Hays and her dog were taken into custody,” a police spokesman said. 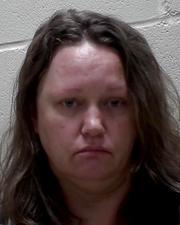