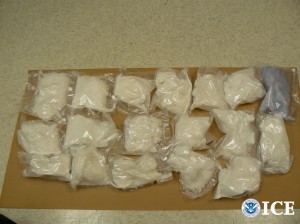 Investigators released photos Wednesday of the drugs seized Sept. 10 in Ferndale at the Grandview Business Center. HSI special agents say they received a tip that led them to the drug find, which included 9 kilograms of methamphetamine and 15 kilograms of cocaine. The drugs have an estimated U.S. street value of $550,000 and a street value of more than $1 million in Canada.

No arrests have been made. The case remains open and ongoing.