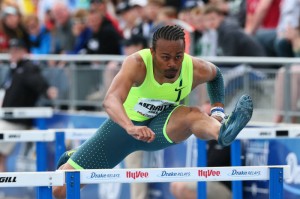 DES MOINES – The 105th running of the Drake Relays presented by Hy-Vee came to a close on Saturday, and a sellout crowd witnessed four meet records and four world-leading marks at Drake Stadium.

Kristi Castlin edged Brianna Rollins in the women’s 100-Meter Hurdles Moscow World Championship Rematch, with a world-leading and Drake Relays record mark of 12.571. Rollins was just behind Castlin, finishing in 12.576, which was also faster than Damu Cherry’s 2010 meet record. Rollins streak of 19 straight races won was snapped, which dated back to the 2012 U.S. Olympic Trials.

“I was surprised,” Castlin said. “This is my first race of the season. I had a little bit of a chip on my shoulder being in lane eight. I had to execute my best race since I was out there on my own.”

Tiffan Ross Williams won the other Moscow World Championship Rematch that was run on the Blue Oval Saturday, the women’s 400-meter hurdles, with a 55.53 performance, which is good for the second-best time in the world this season.

“For me to come out and win this race is a big stepping stone because we have Diamond League coming up,” Williams said. “These last three years have been a real struggle for me, especially when you’re used to winning but I had a baby [2010]. So to be back to be on top feels great. I finally had my race together.”

Excitement built in the men’s special invitational shuttle hurdle relay, as the USA White team consisting of Jeff Porter, Dominic Berger, Aries Merritt, and Ty Akins won by a slim margin over the Jamaican relay team comprised of Andrew Riley, Deuce Carter, Hansle Parchment, and Stephan Fennell. The USA White team posted a time of 53.77, slightly ahead of the Jamaican time of 53.83.

“I really didn’t know what to expect,” Lowe said. “It was a coin toss. I have been training really, really hard, but I hadn’t had any great competitions up to this point. I had two small ones just to see where my steps were. This week I came and jumped at Hy-Vee. That was exciting. To come out here and take the win made me feel like I still have the juice. The last real competition I had was in Belgium in 2012 right after the Olympic Games.”

Aman Wote dominated the field in the special invitational men’s mile, crossing the finish line in a world-leading time of 3:53.39. Nick Willis and Pat Casey each finished seven seconds behind Wote, placing second and third, respectively.

In the second year of the Hy-Vee Cup, a tie occurred in the men’s standings between Arkansas and Illinois as each scored 34 points. Heading into the final event, the 4×400-meter relay, only two points separated the teams, with the Illini holding the advantage. The race came down to the wire, with Arkansas posting the winning time of 3:03.89, just ahead of the Illinois relay squad.

The women’s standings proved to be different, as Baylor already clinched the Hy-Vee Cup before the 4×400-meter relay, which the Bears won in 3:31.88.

The Hy-Vee Cup resumed in the Saturday morning session, with the men’s and women’s 1,600-meter sprint medley relay. In the women’s race, North Dakota State won the event in 3:47.73, which broke the Bison’s school record in the event by over four seconds. The mark was also good for the fifth-best time in the country this season. Arkansas finished second in the event, and Baylor was third. Georgia edged Illinois in the third heat of the men’s relay, crossing the finish line in 3:18.22, to win their third consecutive title in the event.

The men’s university distance medley relay was dominated by UTEP, which finished in 9:35.45, five seconds faster than Washington and Illinois, the second and third-place finishers. The Huskies won the women’s race with the sixth best collegiate time of the season, 11:09.59. Baylor finished second in the event, and Iowa State was third.

The women’s 4×100-meter relay had one of the closest finishes of the weekend, with the top four teams finishing within 0.01 of each other, before Kansas was disqualified for being out of the zone. Iowa emerged as the winner in the event with a time of 44.51, just in front of Ohio State and Baylor. Baylor won the men’s 4×100-meter relay in 39.14, ahead of Arkansas and Illinois, which were in a heated battle for second-place. The Razorbacks posted a time of 39.506, which barely beat Illinois’ 39.509 mark.

Oklahoma Baptist set the first of three records of the day in the women’s college sprint medley relay finishing in 3:47.03.

“The pressure is on you to stay in front,” Oklahoma Baptist anchor Hannah Helker said. “When you are out there by yourself it is just you and your mind. Sometimes that is a scary place to be. I never have before, but I did today [look at video board]. I could tell when he announced there was not a sense of urgency in his voice. That was pretty comforting.”

In the high school girls’ shuttle hurdle relay, both Mt. Pleasant and Urbandale upended the previous meet record from the event, set last year by Waukee, but Mt. Pleasant was disqualified for leaving early, so Urbandale took the title in 1:02.41.

The final meet record to fall was in the high school boys’ 1,600-meter run as Josh Evans of Linn-Mar broke his own record in the event with a 4:10.76 performance.

Stephanie Jenks of Linn-Mar won her second title of the weekend, but her 4:28.72 finish was just shy of topping Katie Flood’s 2010 meet record.

“I am pretty happy with my race, even though I did not get the state record by a small margin,” Jenks said. “I thought it would be cool to get two records. That was the plan. I am up for any challenge. If you ask me to do something, I will do my best to do it. My legs were not too tired today. I think the 800 yesterday loosened them up. I have felt good all week.”

A pair of runners defended their titles, first with Sarah Plock of City High holding on in the 400-meter hurdles to win in 1:02.38, just ahead of Carly Donahue of Mt. Pleasant. Georgia’s Carly Hamilton had a dominating performance in the women’s 1,500-meter run, using a 4:17.38 mark to repeat as champion, while Sam Penzenstadler of Loyola of Chicago repeated as champion in the men’s 1,500-meter run with a time of 3:45.27.

Also noteworthy was the performance of Assumption’s girls’ relay teams, which won the 4×100, 4×200, 4×800, and the sprint medley relay this weekend on the Blue Oval.