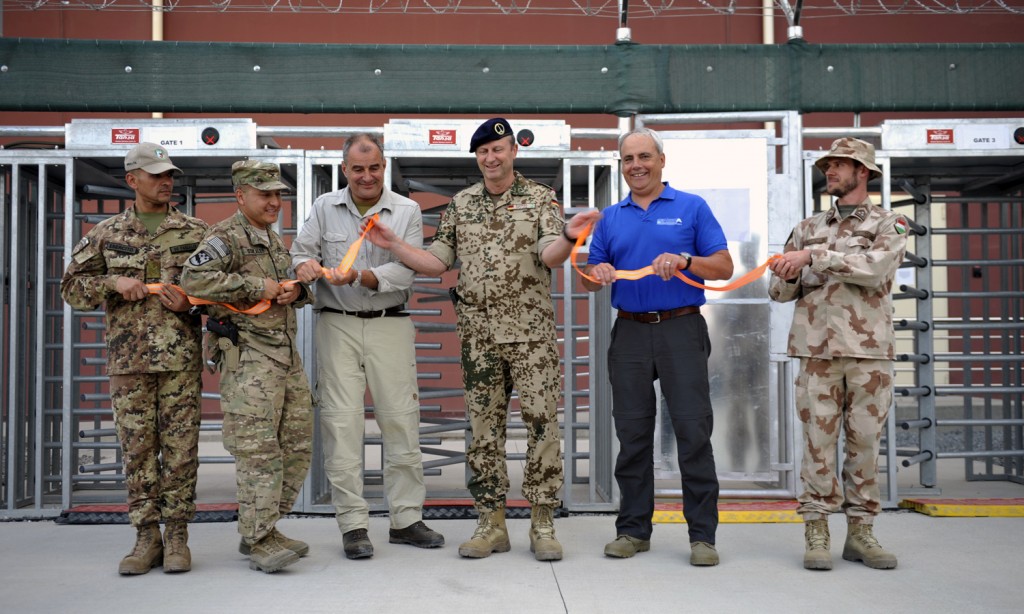 The grand opening of the AMNOC marks the new way information and computer data is stored and housed in the Afghanistan theater of operations. The AMNOC offers NATO countries working in Afghanistan the ability to house all computer servers and data towers in a monitored and centralized location.

The ceremony opened with German Maj. Gen. Dieter Warnecke, ISAF Joint Command deputy commander, giving a speech about the importance of the event.

“This is a milestone for the ISAF information and communication system community, and its support to the ISAF mission,” said Warnecke. “The importance of this event is underlined by the presence of the two heads of the two NATO agencies responsible for the construction of this impressive facility: Mr. Koen Gijsbers, general manager of the NATO Communications and Information Center, and Mr. Mike Lyden, general manager of the NATO Support Agency.”

Warnecke described the building as being designed to provide single enterprise service management for all the NATO computer information systems capabilities deployed in Afghanistan.

“Personnel working in this center will provide this mission-critical service 24 hours a day, seven days a week,” said Warnecke. “That means that this new building is representing the core of the Afghan Mission Network.”

Warnecke said that the AMNOC will enable all communication command and control from the ISAF Joint Command down to the subordinate units.

“It also establishes a connection to the higher echelon and flanking commands,” said Warnecke. “As well as it is a gateway to the NATO CIS [Communication and Information Systems] back in Europe and North America. Moreover, the new AMNOC provides the plug-in for all national extensions of the Afghan Mission Network.”

Recognizing that the AMNOC also includes the liaison officer of all troop contributing nations, Warnecke said this will allow information exchange to become more efficient in the future.
Following Warnecke, Gijsbers opened his speech saying he was thankful to be here and talked about how the AMNOC has been a long time in the making.

“We are here to support the operation, and it is, and will remain, our first priority,” said Gijsbers. “When the idea of IJC stood up in 2009, the idea was already that then we should get this hardened facility to do the operations better and host not only NATO’s command and control facilities, the management of that, but also the data centers for KAIA in the same building. Now it is really finished and finalized due to the great work that a lot people managed to do.”

Gijsbers briefly explained what the AMNOC does. He also said that the customer they provide the services to knows best what it does.
“It is really the hub for everything that we do IT [information technology] wise in NATO related to Europe, to what we do in Europe, and all the commands here,” said Gijsbers condensing down the description of the AMNOCs. “I believe that this is effective, that we have finished just now at this moment, just before we go into the operation resolute support, it’s very important because it will allow us to draw down in a controlled manner-in a way that we have oversight, that we can remain oversight and guarantee continuity of service throughout this operation.”

The ceremony concluded with guests getting a guided tour through the AMNOC facility.