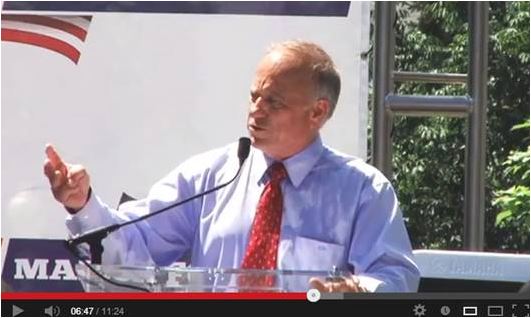 King was a featured speaker at the event, along with Senator Ted Cruz, Colonel Allen West and Senator Jeff Sessions. The event was sponsored by Black American Leadership Alliance, Tea Party Community and Brotherhood Organization of a New Destiny.

The official website for the March of Jobs says that the march was organized to “to help stop Congress’ amnesty push” and claims that “over 22 million Americans are currently out of work or underemployed. All wage sectors, including low-skilled and high-skilled jobs are at risk from this legislation as big business asserts the need for more cheap laborers to do those mythical jobs ‘Americans won’t do.’ Research continues to debunk this myth. As the Economic Policy Institute’s recent report reveals, there is not a talent shortage, but a jobs shortage.”

King expounded on this assertion Monday in his address, claiming the God had “willed us to be here today.”

“We are here today to stand up for free enterprise, for opportunities for the American workers, for God-born, country national-born, and God blessed American workers,” King told the crowd. “We are all American people here in this place. And there’s no place in the world, no country you can come to and become of that nationality, except America.”

Recently, the U.S. Senate passed an immigration reform bill, and President Barack Obama called on The U.S. House to pass the bill as well.   Obama claimed that this legislation “would add a big boost to our economy, strengthen Social Security, and modernize our legal immigration system to make it more consistent with our value.”