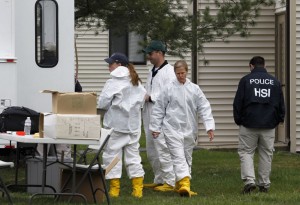 Dias Kadyrbayev, 19, and Azamat Tazhayakov, 19, both of New Bedford, Mass., were charged with conspiracy to obstruct justice by conspiring to destroy, conceal and cover up “tangible objects” belonging to suspected marathon bomber, Dzhokhar Tsarnaev — a laptop computer and backpack containing fireworks.

An FBI affidavit said the fireworks had been emptied of powder.

The affidavit accompanying the criminal complaint said Kadyrbayev and Tazhayakov are both nationals of Kazakhstan who entered the United States on student visas.

The two Kazakhs appeared at a preliminary hearing Wednesday before a federal magistrate who presented the charges and told them of their right to remain silent and their right to a lawyer. CNN said the lawyers for the two delayed arguments on requests for bond, and the Kazakhs remained in custody.

The FBI affidavit that accompanied the department statement alleged the two Kazakhs and Phillopos admitted they removed a backpack from Dzhokhar’s dorm room April 18, and the two Kazakhs got rid of it after concluding from news reports that he was one of the Boston bombers.

The backpack and other material was put in a Dumpster, the affidavit said, because “they did not want to get Tsarnaev in trouble.”

Dzhokhar was a student at the University of Massachusetts at Dartmouth. The three additional suspects attended the school in recent months, The Washington Post said.

There was no indication the three new suspects knew about plans for the bombing beforehand.

Three people were killed and 260 injured April 15 in the two bombings near the Boston marathon finish line.

Officials have said two explosive devices were set off along the marathon route by the two brothers, ethnic Chechens. The elder brother, Tamerlan, was killed in a police shootout days after the attack. Dzhokhar, a naturalized U.S. citizen, was wounded and later taken into custody.

A Chinese immigrant who was carjacked by the Boston bombing suspects told CBS News he quickly learned the Tsarnaev brothers were involved in more than a robbery. The 26-year-old man, identified only as “Danny,” said in his first television interview a man pointed a gun at him after he pulled his new Mercedes sport utility vehicle over to send a text message.

After telling Danny, “Don’t be stupid,” the gunman said he was responsible for the Boston Marathon bombings, adding, “And I just killed a policeman in Cambridge.”

The gunman was Tamerlan Tsarnaev and his brother, Dzhokhar, was trailing behind the carjacked Mercedes in another vehicle, Danny said.

After pulling over, the two suspects loaded bombs into the back of Danny’s vehicle. Then Tamerlan and his brother began speaking to each other in Russian.

Danny said he recognized the word “Manhattan” and assumed they were going to New York “because they asked me a lot of questions.”

When Danny’s phone rang, he asked permission to answer it and told the caller, his roommate, that he was going to sleep at a friend’s place.

Danny said he managed to escape the pair when they stopped for gas. He ran across the street to another filling station and persuaded the clerk on duty to call 911.