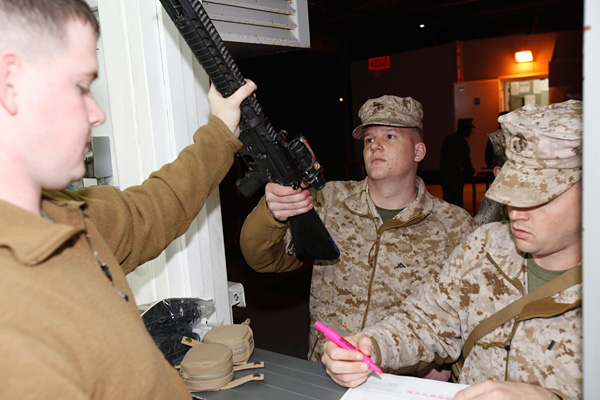 CHERRY POINT, N.C. – Marines from the 2nd Marine Aircraft Wing (Forward) command element and subordinate units deployed to Afghanistan in a series of recent flights. In the coming weeks, 2nd MAW (Fwd.) is scheduled to take over aerial responsibility for southwestern Afghanistan from 3rd MAW (Fwd.) as part of NATO operations in partnership with Afghan National Security Forces.

During the year-long deployment, 2nd MAW (Fwd.) will provide all manner of aviation support to troops on the ground, including close-air support, troop transport, assault transport and medical evacuations.

With American forces poised to withdraw from Afghanistan in 2014, 2nd MAW (Fwd.) will play an important role in transitioning security responsibility from American forces to Afghan forces.

“This is a time of transition, 2nd MAW (Fwd.) will be closely synced to the requirements of the Afghan Forces through embedded Security Forces Assistant and Advisor teams,” said Lt. Col. Charles J. Moses, a senior member of the 2nd MAW (Fwd.) staff.

“Along with our capability is an ever-increasing Afghan National capability that is in transition to support the mission,” said Moses. “We see the security lead being taken by Afghans, and that lead includes self-supported missions where our aircraft will be available but not required due the success of the Afghans who fill the ranks of the Afghan 215 Corps in Regional Command Southwest.”

With Afghan forces taking on more missions on the ground, the wing will continue to provide air support directly for partnered Afghans in battle.

“There are robust Security Force Assistance Teams forward deployed at all levels of command from regional to brigade,” Moses said. “Our embedded teams will coordinate U.S. support for Afghan missions which will include 2nd MAW (Fwd.) forces. The transition of security lead is already changing from U.S. to Afghan-advised, and all Marines are postured to make them succeed.”

Many wing Marines participated in previous Iraq and Afghanistan campaigns and bring a treasure trove of experience and knowledge that will enhance their ability to ensure the Afghans‚Äô success.

For the Marines, the deployment is about supporting the fight and sharing the experience of deployment with their fellow Marines.

“I’m a radio operator,” said Cpl. Nicholas R. Jurek, field radio operator with the Marine Wing Communications Squadron 28 detachment that deployed to provide communications support to the wing. ‚ÄúWithout communications, the Marines on the ground could die. I play a critical role. I like deployments. It’s a really good chance to get close with your brothers that you know already, but you get closer with them. It’s a special bond that we share.