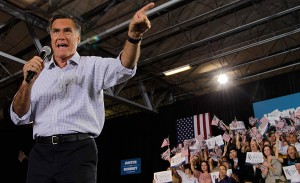 CORAL GABLES, Fla. — Mitt Romney sought to assuage Latino voters Wednesday, downplaying positions he took on immigration during the GOP primaries, vowing to seek a bipartisan solution and castigating President Barack Obama for failing to keep promises he made to the fast-growing population segment.

Romney spoke at a Univision forum at the University of Miami; Obama is scheduled to appear Thursday. Later, Romney rallied thousands of Latinos at a raucous “Juntos con Romney” nighttime rally; salsa musicians sang his name, and he was introduced by his son Craig, a fluent Spanish speaker. Romney listed several star Latino politicians who are Republicans, and urged Latinos to join them.

Latinos overwhelmingly support Obama over Romney, and Democrats over Republicans — a concern Romney voiced in what he thought was a private conversation at a May fundraiser that was surreptitiously recorded and published Monday by Mother Jones.

“We’re having a much harder time with Hispanic voters, and if the Hispanic voting bloc becomes as committed to the Democrats as the African-American voting bloc has in the past,” Romney said, “why, we’re in trouble as a party and, I think, as a nation.”

The recording made headlines because of Romney’s characterization of Obama’s supporters as dependent on the government and not paying income tax, remarks that Romney has stood by.

But the comments about Latino voters, echoing the view of some other prominent Republicans such as Florida Sen. Marco Rubio and former Florida Gov. Jeb Bush, were also noteworthy. Romney also mentioned that his late father, George, was born in Mexico, and said: “Had he been born of Mexican parents, I’d have a better shot of winning this.”

“But he was unfortunately born to Americans living in Mexico. He lived there for a number of years. I mean, I say that jokingly, it would be helpful to be Latino,” Romney was recorded saying, a quip he repeated during Wednesday’s forum.

The liberal group MoveOn.org released an ad in several states with growing Latino populations that took the candidate to task for suggesting his chance of winning would be enhanced if he was Latino.

“You’ve pledged to kill the DREAM Act, you’d enable the police harassment of Latinos in Arizona, and your party is trying to suppress Latino votes,” a woman tells the camera. “But you joke that you wanna be one so you can win?”

At the forum, Romney criticized Obama for using an executive order to allow some young people who were brought in the country illegally to remain here, saying it was an election-year pander that failed to permanently fix the problem.

He declined to specify what he would do with these young people, but said he does not believe in mass deportation and would allow those who joined the military to remain here legally.

“I said time and again during our primary campaign, ‘we’re not going to round up 12 million people … and have everyone deported.’ Our system isn’t to deport people. We need a long-term solution,” Romney said. “… This is something that is going to have to be worked out by Republicans and Democrats together.”

Romney was asked whether the nation should follow Arizona’s immigration law, which he called a model during the primaries, when he also said illegal immigrants would self-deport. Romney did not answer the Arizona question, but said people have the right to decide whether to return to their native countries to stand in line for legal immigration.

“On critical issues, he continued to refuse to answer any of the tough questions or provide any specifics on what he’d do as president,” Spokeswoman Lis Smith in a statement. “… It’s time for Mitt Romney to come clean and get specific about his policies.”