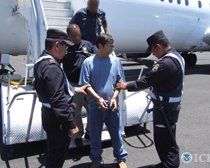 EL PASO, Texas — Officers with U.S. Immigration and Customs Enforcement’s (ICE) Enforcement and Removal Operations (ERO) Tuesday deported a man from El Salvador who was wanted for aggravated homicide in his home country.

Sanchez-Canjura is wanted by the National Civil Police in San Salvador, El Salvador, for a 2011 homicide. Sanchez-Carnjura was turned over to El Salvadoran authorities at the airport.

Sanchez-Canjura entered the country illegally Sept. 7, 2011, by wading across the Rio Grande at El Paso, Texas. Agents with U.S. Customs and Border Protection’s Border Patrol arrested him shortly after he crossed into the United States.

“These removals of fugitive aliens send a clear message that we will not allow them to use the United States as a sanctuary for their crimes,” said Adrian P. Macias, field office director for ERO El Paso. “ICE continues to work closely with our law enforcement partners on both sides of the border to hold criminals accountable, and make our communities safer.”

Since Oct. 1, 2009, ERO has removed about 455 foreign fugitives from the United States who were being sought in their native countries for serious crimes, including kidnapping, rape and murder. ERO works with ICE’s Office of International Affairs, foreign consular offices in the United States, and Interpol to identify foreign fugitives illegally present in the country.