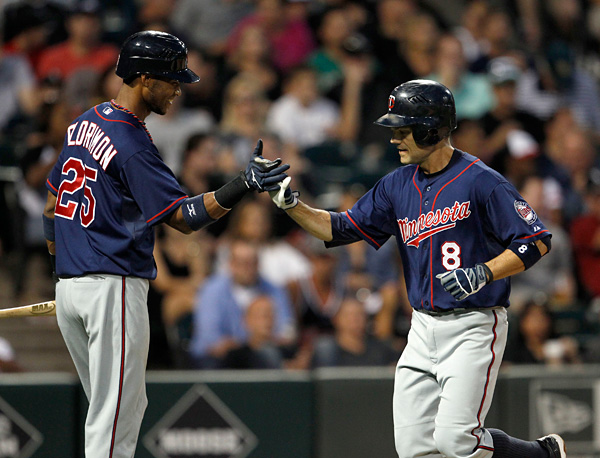 CHICAGO — Jamey Carroll’s major league career began because he just happened to be in the neighborhood.

In September 2002, his minor league season at Class AAA Ottawa was over and he was home in Evansville, Ind., for the offseason. Montreal, the parent club at the time, was in Chicago to play the Cubs. The Expos needed an infielder. He wasn’t far away. So he was called up.

He was 28 years old then. And he has stuck around.

On Monday, Carroll hit exactly 10 years of major league service time, and players usually celebrate reaching such tenure by showering themselves with gifts. Joe Nathan bought himself a new car when he reached the milestone last season.

Carroll celebrated with a home run in the same city in which his major league career started — and the same ballpark where he hit his previous homer — while breaking the longest active homerless streak in baseball.

“I just remember when I first got called up and thinking, ‘Wow, I’ll be 38 if I ever make it 10 years,’ ” Carroll said following the Twins’ 4-2 loss to the White Sox at U.S. Cellular Field. “Honest to God, I’ll tell you I would have bet everything I had — not that I had anything at that time — that that wouldn’t be the case, and here we are. It’s a lot of hard work and a lot of persistence. Thankfully we were able to have this day.”

Unfortunately for the Twins, it wasn’t enough to beat the White Sox, who got a strong outing from fill-in starter Hector Santiago (3-1) and three RBI from Gordon Beckham.

The White Sox, swept in three games in Detroit over the weekend, moved back into sole possession of first place the American League Central, as the Tigers lost at home to Cleveland to fall a game behind them.

The Twins, who left seven runners on, tried to rally late. Justin Morneau drove in Joe Mauer with an RBI single in the eighth to pull them within 3-2. But Chicago got an RBI single from Beckham in the bottom of the inning for insurance.

Talking about a personal achievement after a loss is tough for players to do. But Carroll understandably cracked a smile a couple of times as he spoke about survival.

“It’s not fun to lose,” he said, “and I’m sure I’ll go home with the loss, but in time I’ll understand and appreciate what this game’s about.”

Carroll hadn’t homered since Aug. 9, 2009, against White Sox reliever Scott Linebrink when Carroll was a member of the Indians — 1,348 at-bats and 1,540 plate appearances ago. That was the longest active streak without a home run in the majors.

Carroll drove a belt-high fastball down the left field line. The ball landed in Chicago’s bullpen, and was retrieved and handed to him after the fifth inning.

The home run cut Chicago’s lead to 2-1. The White Sox had taken a 2-0 lead in the second on Beckham’s two-run homer off Samuel Deduno (5-3). The righthander gave up six hits, issued three walks and also hit a batter, but those were the only two runs he gave up in six innings. He pitched at least six innings for the seventh time in 11 outings.

The loss dropped the Twins to 5-15 over their last 20 games, but they were happy for Carroll.

“Ten years in the big leagues is special,” manager Ron Gardenhire said. “He’s a game-on type player. He plays hard all the time, so it was really fun in the dugout when he hit that home run.”