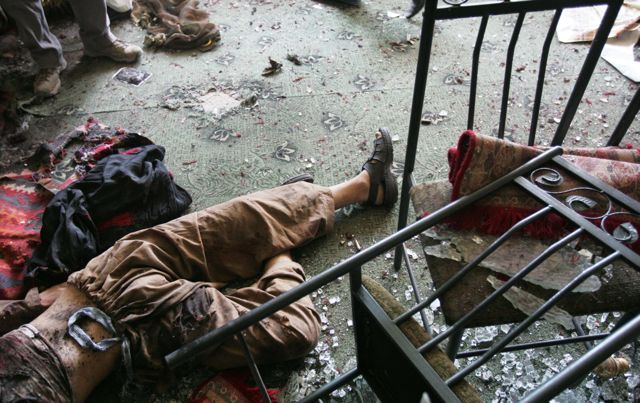 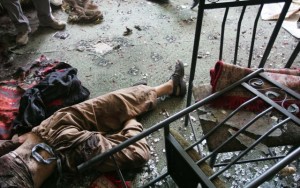 KABUL, Afghanistan — To the people of Afghanistan’s teeming, dusty capital, sparkling blue Lake Karga on the city’s outskirts has long been a tranquil haven.

(PHOTO: A dead body of a Taliban militant is seen after a battle between Afghan security forces and Taliban militants at a hotel in the western edge of Kabul, Afghanistan, on June 22, 2012. As a fierce gun battle between Talibanmilitants and Afghan police at a rest house in Qarga Lake, Kabul came to an end, all militants were killed. Also dead were eight others, including four civilians, three security guards and a policeman, official sources said. )

But in a brazen evening attack, a team of Taliban assailants turned the quiet lakeshore into a scene of horrors, storming a popular hotel, seizing dozens of hostages and killing 18 people, most of them diners relaxing over a late-night meal.

The bloody 11-hour siege of the Spozhmai resort, the latest in a series of high-profile insurgent strikes around the capital in recent months, ended Friday when elite Afghan police supported by NATO troops killed the last of the attackers.

While NATO and the country’s government hailed Afghan forces for preventing even more fatalities, the attack was graphic demonstration that insurgents can still strike seemingly at will. Their reach leaves many Afghans feeling jittery and fearful as the U.S.-led NATO force begins pulling out.

In claiming responsibility for the attack, the Taliban described the hotel as a “hub of obscenity and vulgarity,” a description that harked back to the deeply conservative movement’s five-year rule over Afghanistan before being dislodged by the 2001 U.S.-led invasion. Under its harsh interpretation of Islam, a place where men and women mingled and dined together, and where guests were permitted to consume illicitly procured alcohol on the premises, was seen as an abomination.

The victims were also apparently targeted for who they are: well-educated, affluent and cosmopolitan, representing an elite class generally supportive of President Hamid Karzai’s government and the presence of Western troops in Afghanistan. Targeting them was explicit warning that once the NATO force is gone, they will be left defenseless.

The Afghan government issued a blistering statement blaming “brainwashed terrorists” based in Pakistan for the attack. Gen. John Allen, the U.S. Marine who commands Western troops in Afghanistan, said the assault “bears the signature” of the Haqqani network, a Taliban offshoot with its home base in Pakistan’s tribal areas.

Evidence of a link to Pakistan could further inflame tensions between the U.S. and the Pakistani security establishment.

In the aftermath of the attack, the once-picturesque hotel lay in ruins, its facade blasted away, floors sticky with blood, furniture smashed and shattered glass and shell casings littering the ground. Bodies lay heaped and scattered amid the debris of half-finished meals and forlorn possessions: here a handbag, there a shoe.

The attack began shortly before midnight Thursday. By some witness accounts, the assailants initially wore all-enveloping blue burqas to disguise themselves and buy a few moments of confusion, throwing off the garments when they stormed into the hotel. First reports put the number of attackers at seven; the government later reduced that to four.

Heavily armed and wearing suicide vests, the gunmen swiftly seized control of the hotel, setting off a battle that continued until the following midmorning. Several hundred people were inside the complex at the time, including dozens attending a private party in the dining hall that was targeted.

Many were cut down while they tried to flee as the room was sprayed with bullets; some saved themselves by jumping out windows and into the lake. At least one of the attackers blew himself up in the course of the assault.

Survivors described terrifyingly methodical executions of some diners, mainly men, who pleaded for their lives but were shot point-blank by the attackers. In a token of the lethal efficiency of the assailants, only five people were reported wounded, including a police officer taking part in the rescue operation.

Dozens of others were seized as hostages, and survivors recounted that the gunmen railed about pimps and prostitutes who they insisted were present in the hotel. A 14-year-old waiter named Ebadullah said that after killing the security guards, attackers cornered him in an adjacent room and demanded to know where the “adulterous bastards” were.

They left him alive, and he spent the long night crouching alone, listening to the din of gunshots and explosions. “I was frightened to death,” he said.

The Taliban claimed that foreigners were among the dead, but Afghan authorities said all those killed were Afghans. After the siege finally ended, weeping relatives gathered outside the hotel, waiting to claim the bodies.

Abdullah Shah, in his 60s, lost his son, a government worker who was married with five children. “Last night he came here with his friends, and this morning we heard that he was killed,” he said.

NATO sent in special operations troops and helicopters to aid Afghan forces. But Western military officials were careful to characterize the rescue operation, in which one Afghan police officer was killed, as Afghan-led. A similar attack last summer on a landmark Kabul hotel ended after international troops intervened, providing helicopters and commandos.