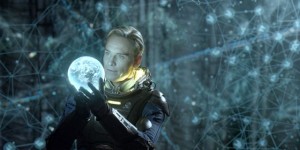 Ridley Scott’s “Prometheus” plays like the “Alien” franchise’s greatest hits. Scott, revisiting the 1979 sci-fi classic that made him famous, samples “Alien,” James Cameron’s “Aliens” and the later films in the series for this state-of-the-art prequel, using plot points, situations, versions of characters and themes from those films to back-engineer his way into the day humans first ran into the ultimate alien killing machine.

It’s good-looking film with a first-rate cast. But “Prometheus” is to “Alien” what “2010” was to “2001: A Space Odyssey.” It’s the difference between a masterpiece and a merely watchable revision of that masterpiece.

Late in this century, two scientists, played by Noomi Rapace (the original “Girl with the Dragon Tattoo”) and Logan Marshall-Green, find that one last ancient cave painting that confirms their theory. Giants from the stars must have visited Earth. Maybe they even populated it. They call these aliens “The Engineers.”

The painting is “not a map,” Dr. Shaw (Rapace) tells her paramour, Dr. Holloway (Marshall-Green). “It’s an invitation.”

Onboard is a robot designed to fit in with the humans. David is played by Michael Fassbender with a lovely mechanical jerk to his every movement. He is emotionless, curious and always on task. Alas, he has a machine’s morality. He is all about the mission.

A future trillionaire has sent a team of 17 to this distant star system. The scientists, Shaw and Holloway, are here, with a geologist, biologist, a working crew and a folksy, Southern-accented captain, played by Idris Elba.

The boss, the lady calling the shots, is Meredith Vickers, played by a steely Charlize Theron in a Doctor Evil/ Bond villain suit.

They find the planet, touch down next to a pyramid (shades of “Alien vs. Predator”) and start poking around.

The first sign that this isn’t the young Mr. Scott’s “Alien” is in the demeanor of the crew. This is a seriously unprofessional bunch. Everybody breaks protocol. Everybody, it seems, has a reckless streak. Helmets are removed, alien air is breathed. Everybody ignores the first rule mommy taught them: See something you don’t recognize — alien urns arranged like the gooey eggs of “Alien,” for instance? Don’t touch.

It’s infuriating, the cavalier way the captain “warns” two members of the expedition that he’s picked up alien “life” and “movement” on the ship’s censors, the idiotic risks Holloway takes, the arrogant bravado of the robot, who randomly punches alien buttons and casually opens alien doors without weighing risks.

The ship is not the dark and cramped working vessel of “Alien.” It’s a bright, open and cheery “Star Trek” set. That robs the picture of its claustrophobia, its dread.

Rapace is the heart of the picture, and she’s wonderfully brave and soulful, as she was in the Swedish films that made her famous. Other’s choices don’t work out as well. Theron’s so villainous she should wear a curly moustache. Why Elba, a Brit, attempted a grammatically suspect Southern drawl is one of the film’s great, clumsy mysteries.

But here’s what dazzles. Instructions arrive by the best big-screen rendition of a hologram ever filmed. Ancient alien surveillance cameras replay the ghostly pixels of what happened to the people who built the pyramid, which had a function the Maya and the Egyptians never told us about. The ambitious script dabbles in Creation mythology, faith, belief and science’s place in that conversation, though it rather muddles its message.

If you’ve seen the original “Alien” films in their gorgeous pre-digital celluloid glory, with their damp sets, their surly but professional working class crews and soldiers who make one fatal mistake, “Prometheus” is bound to disappoint. It looks great, but the rivets on all this back-engineering show. The script is overly complex where the original was lean, with a lived-in sheen.

“Prometheus” is still worth a look, the first sci-fi film to challenge “Avatar” in dazzling visuals and eye-popping future tech. But Scott, trying to top himself, fails.

MPAA rating: R for sci-fi violence including some intense images, and brief language