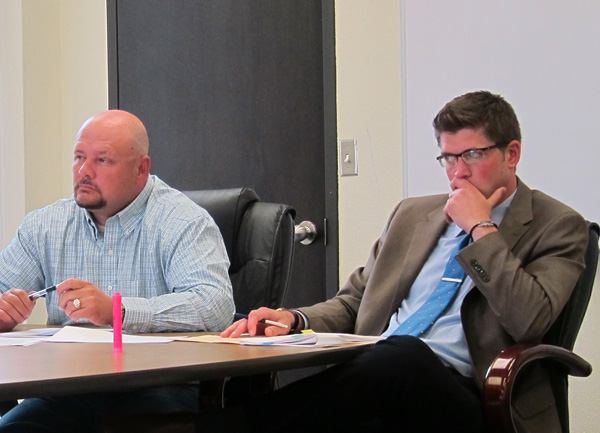 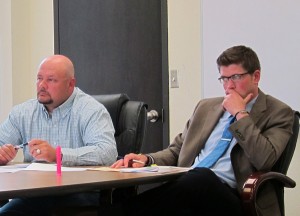 This mayor, council and administrator continue to ignore the real problems in Mason City and make new ones, and people are taking notice.

Case in point, the move to privatize the city’s sanitation department and the revelation that more departments will face the same scrutiny.  As NIT has written for months, the morale at City Hall is at all-time lows, and the evidence is piling up as to why.  Everyone’s job is on the line; the old ways are no longer good enough.  Mayor Bookmeyer has made it clear he knows better than all his predecessors and he has set out to implement his 21st century dogmas; we, his subjects, are lazy and do not work hard enough.  We are not “lean” enough.  Bookmeyer has determined that only through the pursuit of a bottom line and a profit can the city reach its peak potential.  City workers are feeding at the trough and they need to go, one at a time or now, perhaps, a department at a time.

(PHOTO: Council members Travis Hickey and Alex Kuhn listen to City Administrator Brent Trout describe plans to possibly privatize one or more city departments.  Kuhn was the lone dissenter and wanted no part of it.)

Bookmeyer sits at the meetings, mostly quiet, but behind the scenes conducts Brent Trout to set about on this mission; he has his council in place, perhaps five out of six sold on the idea.  Their mission is to downsize City Hall and hire what amounts to a hodge-podge Haliburton to take over.  Those of you in the know remember the U.S military followed this same plan in the second Iraqi war.  Duties once performed by military were farmed out to private companies like Haliburton.  That’s why it cost the military astronomical sums to wash loads of clothes or deliver fuel from Kuwait to the battlefield; the private sector was in control, and they could charge whatever they wanted.  The taxpayers didn’t find out until later that we got screwed.

Now, you and I face this same transformation here in Mason City.  After sanitation falls, which department is next?  The MCPD?  Has the mayor already instructed Brent Trout to call Blackwater for a bid?

I call this “dogma” fewer services for fewer people for fewer dollars.  Even as our city pool sat empty this glorious weekend, hot temps and hot tempers flaring, Central Park and the Cultural Crescent were primped and primed for the Mercedes and Infinity drivers; their playground was immaculate.  The city’s restless youth took to the streets with reckless abandon; they had our brave law enforcement officers on their heels at times, reaching for gas and smoke canisters, sometimes desperately calling all over the area for backup as brawls erupted all over the Music Man’s favorite park.  Mr. Toot might have dropped his trombone and ran had he been there. 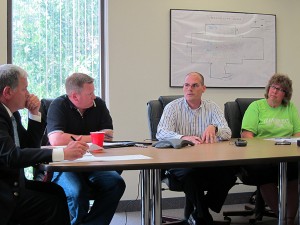 Our Mayor and Council were not to be seen nor heard.  Where were they?  Why have they swept this under the rug?  Will this calamity ever be addressed, explained to the public?  Is running a city only about dollars and cents, or is it also about serving all the citizens, the youth included?  Why is the focus on ignoring the many to please the few?

(PHOTO: Councilman Scott Tornquist told the sanitation workers that they should embrace the request for proposals process as their jobs are on the line.)

This Mayor and Council need to step away from the accounting ledger for two minutes and look around.  The police are down several officers; the morale at the fire department is sinking.  These are our sworn protectors.  The youth of the city, many abandoned by their parents to one extent or another, are never given a second thought by city leaders, but yet, they live here too.  They are becoming more bold; they have disdain for law enforcement and some of them are becoming vicious.  This city will devolve into pandemonium if City Hall, law enforcement, parents and volunteers do not get their act together and start addressing this forgotten segment of the population.  This is a problem with no bottom line, no red ribbon to be cut; it is not confined to a blue zone.  It may be impossible for our leaders to grasp this issue, but they must.  The creative thinking may not exist at the council table, but something must be done.  The foundation of the city is crumbling even as its core gleams in golden light when the sun sets.

Citizens, councilors, mayor, parents, volunteers, take notice and do something.

Watch the Mason City Council, Mayor Eric Bookmeyer and City Administrator Brent Trout discuss the privatization of of the sanitation department and the possibility of more to come.  55 minutes.