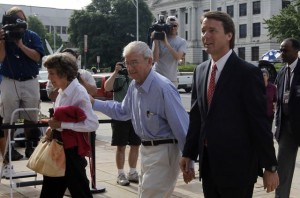 GREENSBORO, N.C. — A Raleigh, N.C., lawyer who represented John Edwards before he was charged with violating campaign finance laws told an attorney for the Virginia philanthropist at the center of the case that Edwards had benefitted from the payments funneled to his former political campaign aide.

During the 10th day of testimony, Alex Forger, the New York attorney who counsels Rachel “Bunny” Mellon on a range of legal matters, recounted a conversation that he had with Wade Smith, a courtly Raleigh lawyer described by many as “the dean” of the North Carolina defense bar.

The conversation between the attorneys, recounted by Forger right before jurors went home for the weekend, came after Mellon’s lawyer had discovered she had sent $750,000 in checks to interior decorator Bryan Huffman, who then endorsed them and sent them to Edwards’ former political aide Andrew Young.

Young’s wife Cheri then endorsed the checks, using her maiden name, and deposited them into the Youngs’ private bank account.

The call between Smith and Forger came after federal investigators had issued subpoenas in the Edwards case and the North Carolina lawyer was giving the New York attorney “a head’s up” or courtesy call.

During that call, Forger asked who was the beneficiary of the money. On his own, he said, he had already determined that it had not gone to Huffman and he did not know Young’s wife. So Smith told him he would check and get back to him.

There was another call a bit later, and Smith had an answer for Forger.

“He said that John has acknowledged now that this was for his benefit,” Forger said, not elaborating on what the word “benefit” meant to him.

How the term is ultimately parsed could affect the outcome of the trial. The government contends that the money was intended to support Edwards’ 2008 run for the Democratic presidential nomination and he violated campaign finance laws by not reporting it and accepting funds in excess of contribution limits. Edwards’ lawyers argue that the checks from Mellon were gifts given to take care of a personal matter, namely the hiding of his pregnant mistress, and were not subject to campaign finance laws.

Prosecutor Robert Higdon told Judge Catherine Eagles shortly after Forger’s description of his conversation with Smith that it would be a good time to break for the weekend.

The defense team has not had a chance to cross-examine Forger, a tall man with a shock of white hair who is a graduate of Princeton and Yale Law School. He said he had been practicing estate law for more than 60 years.

Mellon, a woman whose wealth is mostly in artwork and real estate, according to Forger, was a fan of Edwards, and indeed backed him for president.

But Mellon, just three months shy of her 102nd birthday, has not been called to testify by prosecutors.

Huffman, who was on the stand Thursday afternoon and Friday morning, described many conversations he had with Mellon about a scheme the two referred to as “the furniture business.”

Smith, who bowed out of the Edwards case in October 2011, citing a potential conflict of interest, could be called by Edwards’ defense team to clarify what he meant by that statement if Forger does not on Monday when the trial resumes.

Smith has declined in the past to comment on the potential conflict.

Prosecutors told judge Catherine Eagles they could call finish with their side of the case by Thursday. It is unclear whether the defense plans to put on evidence and, if so, whether Edwards will take the stand in his defense.

Typically, defense lawyers ask for cases to be dismissed after the government finishes presenting evidence.

The case will test the sweep of finance law and could put Eagles in the position of deciding before closing arguments whether prosecutors have presented enough evidence to show the payments were campaign contributions that not only exceed legal limits but were unreported.