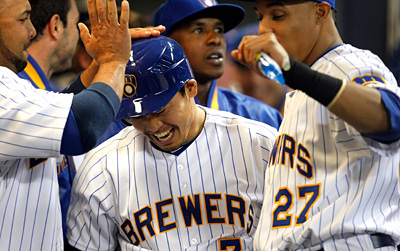 MILWAUKEE — One-run games have been the norm this week for the Milwaukee Brewers.

And when you’re in an offensive funk, like the Brewers have been, that often adds up to trouble.

(PHOTO: The Milwaukee Brewers’ Norichika Aoki, middle, is greeted by teammates in the dugout after his inside the park home run against the Colorado Rockies in the fourth inning at Miller Park on Friday, April 20, 2012, in Milwaukee, Wisconsin.)

Such was the case again Friday night. Milwaukee managed just five hits and couldn’t score the tying run with one out in the bottom of the ninth in falling to the Colorado Rockies, 4-3, at Miller Park.

The Brewers beat the Los Angeles Dodgers on Tuesday and Wednesday nights in dramatic, walkoff fashion. But the past two games they’ve experienced the flip side, losing by one run both times, and it’s resulted in plenty of frustration.

Milwaukee scratched and clawed its way to a 3-3 tie in the sixth inning on a pair of run-scoring singles by Corey Hart and Mat Gamel. It remained that way into the ninth, when John Axford came on to try and hold the fort and give the Brewers’ offense one last crack.

But it was a struggle from the outset for the right-hander.

Pinch hitter Jason Giambi led off with a bloop single into left and was replaced on the bases by speedy Eric Young Jr. In an attempt to keep him close, Axford threw over to first the very next pitch and hit Young in the backside with the ball.

It trickled away from Gamel at first, allowing Young to move to second. Young then tagged and went to third on a fly ball to right by Marco Scutaro.

Rockies manager Jim Tracy made another call to the bench, this time sending up veteran Michael Cuddyer in place of Dexter Fowler. Cuddyer responded with a single to center that plated Young with the decisive run.

Milwaukee at least made things interesting in the ninth.

After Hart popped out to shallow right, Gamel followed with a double off the wall in left to put a runner in scoring position for Alex Gonzalez and Jonathan Lucroy — a pair of hitters capable of driving in big runs.

Gonzalez fouled out to first, though, and Lucroy struck out swinging to end it.

Gamel and Norichika Aoki accounted for four of the Brewers’ five hits. Meanwhile, the struggles for Ryan Braun continued. He went 0 for 3 with three strikeouts and also was hit by a pitch.

“This stretch, he’s getting out of the zone with his swings,” Roenicke said. “When he’s good, he doesn’t chase very much. He’s chasing, jumping a little bit. We need to get him healthy, too. When he feels strong up there, I think that changes a lot of what happens with his at-bats.”

The Brewers were having no luck against Colorado starter Jhoulys Chacin early, as the right-hander retired the side in order in each of the first three innings.

Rickie Weeks made it 10 straight batters by Chacin when he grounded out to shortstop to lead off the fourth. That brought up Aoki, who was making just his second start of the season and first in center field.

On the second pitch he saw from Chacin, the left-handed Aoki laced a single the opposite way that leftfielder Carlos Gonzalez raced in and made a diving attempt to catch.

He was a half-click late, though, and the ball rolled all the way to the wall. Aoki never stopped motoring and came all the way around to score without a slide, pulling the Brewers to within 2-1.

It was Aoki’s first major-league home run, and the crowd of 39,188 acknowledged it by calling the former Japanese Central League all-star out for a curtain call.

“I wasn’t expecting to get a home run there,” Aoki said through translator Kosuke Inaji. “I was just running as hard as I could, and I’m very happy with the results.”

Colorado padded its lead in the sixth when Todd Helton crushed a solo home run to right-center to make it 3-1. Brewers starter Shaun Marcum then did a nice job of extricating himself from a further jam by inducing a pair of groundouts.

Aoki got things going for the Brewers in the sixth as well.

This time, he sent a soft base hit to center that he turned into a double. Chacin hit Braun and followed up by striking out Aramis Ramirez.

Needing to retire Hart to get out of it, Chacin instead surrendered a soft single to left that scored Aoki and moved Braun to second. Gamel kept up his hot hitting with a broken-bat single to center to score Braun and tie things, 3-3.

That’s how things remained until the ninth, when Cuddyer’s single made it 4-3.

Axford took the loss for the Brewers. Marcum, meanwhile, gave up eight hits, three earned runs and two walks to go along with five strikeouts in his six-inning stint.

Roenicke also said Marcum was having issues seeing the signs from Lucroy, which necessitated a number of meetings.