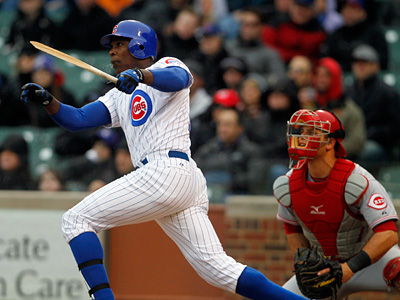 CHICAGO — It had the feel of a game in late September, with a wind chill of 35 degrees for the first pitch, the Wrigley Field stands less than half full and the Cubs spiraling uncontrollably downward.

And to think there’s still another week left in April.

(PHOTO: Chicago Cubs left fielder Alfonso Soriano (12) breaks his bat as he flies out to end the first inning against the Cincinnati Reds at Wrigley Field in Chicago, Illinois, Friday, April 20, 2012. )

The Cubs’ losing streak hit six games Friday as they imploded in a miserable first inning and never recovered in a 9-4 loss to the Reds that left them 2-6 against the National League Central.

This was one of those total losses as mediocre pitching, light hitting and bad defense combined to leave the Cubs outscored 43-14 in the six losses.

Manager Dale Sveum says the lackluster performances have not been “because of lack of effort or preparation … these guys are busting their butts and we’re going to get out of this.”

But they won’t if they continue down Friday’s path, when starter Chris Volstad was charged with four runs in the first, three of them earned. The inning included four hits, two walks, two stolen bases and errors from catcher Geovany Soto and shortstop Starlin Castro.

“Another big inning, same pattern as last game where I need to make better pitches when things start going like that,” said Volstad, who is 0-2 with a 6.19 ERA. “I was most disappointed because, putting team behind 4-0, it’s hard to battle back.”

It is for the Cubs, who were out-hit 12-5 on an afternoon when the wind was howling in from left field at 27 mph. Cub batters did hit some balls hard, but the final score still tells the story.

“That’s probably the best we swung the bat all year,” Sveum said. “We hit the heck out of the ball all day, right at people, and didn’t get nothing to show for it.”

Nothing is what Volstad has in the victory column in his last 14 starts, dating back to last July with the Marlins.

“Some good games, some bad games,” he said of his streak. “That’s the way the game is, I guess. I just have to keep battling and get ready for St. Louis in my next start.”

The Cubs tried to get back in the game for Volstad with a pair of unearned runs in the third inning against Homer Bailey, but the Reds came back with two more in the fourth on Drew Stubbs’ two-out double.

So now the Cubs have a long time to ponder their season’s future, which right now doesn’t look very promising.

“It’s a little frustrating,” Volstad said, “but guys are not getting down. Every day we come in with a positive attitude to start the day off. We’re not the type of team that’s ever going to get down on ourselves or quit or back down from anybody.

“Everyone’s positive. We know the kind of talent we have, we just haven’t shown it yet.”