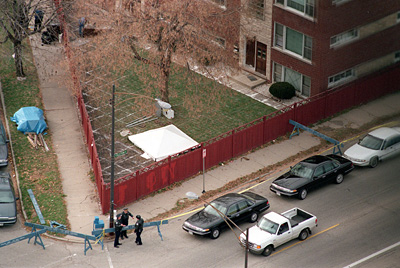 CHICAGO — Nearly two decades after John Wayne Gacy’s execution, Cook County sheriff’s officials hope to excavate the backyard of a Northwest Side apartment building in their continuing search for additional victims of the serial killer, a spokesman for Sheriff Tom Dart said.

(PHOTO: Police guard an area in this 1998 file photo at 6114 W. Miami Avenue, in Chicago, Illinois, where a search was conducted for evidence of victims of serial killer John Wayne Gacy.)

The site actually was previously investigated after a retired Chicago police homicide detective tipped authorities to the fact that he had seen Gacy in the yard with a shovel in his hand before dawn one day in the 1970s. That dig, in November 1998, turned up a glass marble and a flattened saucepan, but no bodies, according to Chicago Tribune accounts of the Chicago police excavation.

Dart returned to the Gacy case last year when he exhumed the skeletons of several unidentified victims in the hopes DNA could help identify them. The inquiry led to the identification of one victim, William George Bundy, a Chicago man who disappeared at age 17. At the time, Dart said detectives assigned to the Gacy investigation were considering a number of other investigative avenues.

Among them: excavating the yard of the apartment building where Gacy’s mother lived and Gacy once worked as a maintenance man.

“This site was one that was always looked at as a possibility for potential victims,” said Frank Bilecki, a spokesman at the sheriff’s office. “And law enforcement should run every lead out. This is just another piece of the Gacy puzzle that should be run out. We hope to do that.”

Dart had not put a timetable on the effort, though Bilecki said he mentioned that spring, when the ground softens, would be a good time. The effort has run into obstacles, however. So far, Cook County State’s Attorney Anita Alvarez has denied Dart’s request to seek a search warrant for the property, saying the sheriff’s office does not have probable cause — sufficient information that the search will produce evidence of a crime — to obtain a warrant.

Sally Daly, a spokeswoman for Alvarez, said that the information the sheriff’s office presented was the same information as in 1998, when the search was done with the consent of the property owner and failed to turn up evidence that Gacy had buried bodies on the property.

“There is even less probable cause now as a result of the negative results of the consented-to search in 1998,” said Daly, adding that the prosecutors in the office were “open to reviewing any new information that the Sheriff’s Office may currently have or obtain in the future.”

Gacy was convicted of the murders of 33 young men and boys in the 1970s, all but one of them strangled, many of them recovered in his crawl space. He was executed by lethal injection at Stateville Correctional Center in 1994.

What brought sheriff’s officials back to the property was that, during the 1998 dig, only two spots were excavated even though radar surveys of the property reportedly detected more than a dozen anomalies under the ground. That raised the suspicions of the retired detective who initially tipped police to the Gacy connection, Bill Dorsch. He provided the Tribune a letter from the radar company saying the initial dig was incomplete.

“In a proper investigation,” the letter said, “the authorities would have been more willing to excavate any possibility.”

Dorsch, who retired in 1994 from the Chicago Police Department after 24 years, recalled that one morning at 3 a.m., as he came home from work, he saw Gacy with a shovel and they chatted briefly. After Gacy’s arrest, he called sheriff’s officials with the information about him, assuming officials would investigate the tip and potentially excavate. That apparently did not happen until the 1998 excavation.

“I couldn’t understand why anybody would not want to follow through on this,” said Dorsch, now a private investigator.