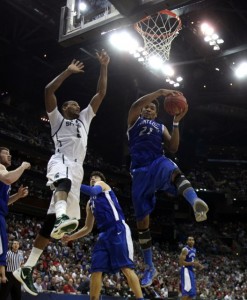 Green’s words worked, but so did his passing.

(PHOTO: Saint Louis’ Dwayne Evans, right, grabs a defensive rebound away from Michigan State Adreian Payne, left, during the first half in the third round of the NCAA Tournament at Nationwide Arena in Columbus, Ohio, Sunday, March 18, 2012. MSU defeated Saint Louis, 65-61.)

Ninth-seeded Saint Louis surprisingly stayed close in the sluggish NCAA tournament round-of-32 game Sunday and had been sagging off Appling, daring the point guard to shoot. He hit some key shots despite the unexpected strategy but none more so than a dagger 3-pointer off an assist from Green en route to a 65-61 victory.

“All night they were pretty much begging me to shoot,” Appling said.

“All night I was begging him to shoot too,” Green added.

The 3-pointer gave the Spartans, the top seed in the West Region, a 58-51 lead with 1 minute, 34 seconds left after the Billikens had just closed to within two points.

Saint Louis controlled the tempo and found its shot in the second half at Nationwide Arena, but it had no real answer for Green.

Along with Appling’s 19 points, Green had 16 points, 13 rebounds and six assists to advance the Spartans to their 10th Sweet 16 in 15 seasons. They’ll face No. 4 seed Louisville on Thursday in Phoenix.

The Billikens’ plan to “muck it up” was accomplished. They were within reach down the stretch with 3-pointers from Cody Ellis and Mike McCall Jr. in the final 30 seconds.

A made free throw after a miss by Austin Thornton with seven seconds remaining gave the Spartans a four-point edge, and the game ended with a missed 3-point attempt by Kwamain Mitchell, who led Saint Louis with 13 points.

“We fought our guts out,” Majerus said.

The Billkens’ poor shooting — especially in the first half — doomed them. They made only 5 of 21 shots (23.8 percent), including 2 of 11 3-pointers, before halftime and shot 35.3 percent for the game.

Michigan State made enough free throws (5 of 8) in the final minute to maintain its lead, and the Spartans joined fellow Big Ten teams Ohio State, Indiana and Wisconsin in the Sweet 16.