US mission ends in Iraq, but war’s wounds remain raw 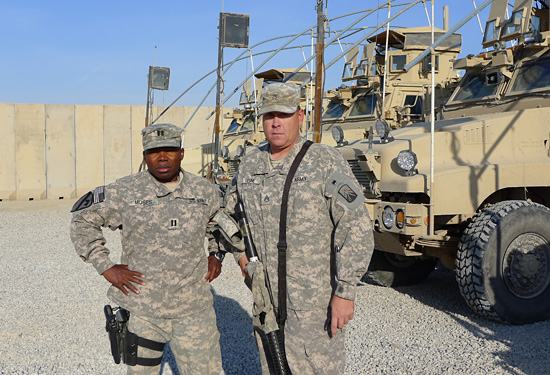 BAGHDAD — After nearly nine years of war, the loss of more than 100,000 lives and hundreds of billions of dollars spent, the U.S. military mission in Iraq has formally ended.

But violence continues to roil the Mideast nation, and its political destiny is far from certain.

Defense Secretary Leon E. Panetta and other top U.S. officials conducted a low-key ceremony on a military base at the Baghdad airport Thursday, furling the flag to signal the official conclusion of one of most divisive wars in American history.

Panetta did not address the controversial origins of the war or Iraq’s continuing troubles.
Instead, he paid tribute to the sacrifices of U.S. troops, nearly 4,500 of whom were killed and 32,200 wounded since then-President George W. Bush ordered the March 2003 invasion that toppled Saddam Hussein.

“To be sure, the cost was high — in blood and treasure for the United States and for the Iraqi people,” Panetta told about 200 troops and a few Iraqi officials during a 45-minute ceremony. “But those lives were not lost in vain — they gave birth to an independent, free and sovereign Iraq.”

Only two U.S. bases and around 4,000 troops remained in Iraq as of Thursday, the rear guard of a force that was more than 170,000 strong at the height of the war and once controlled hundreds of bases. The last of them will depart Iraq by the weekend, officials said.

About 200 U.S. military personnel will stay in Baghdad to administer arms sales and other limited military exchanges as members of the U.S. diplomatic mission.

After more than eight years of security efforts, employees of the U.S. embassy in Baghdad say they still find it too dangerous to work in the country outside the campus-like “Green Zone,” hidden behind a series of towering walls.

But there is no sanctuary from the sectarian divisions that remain a source of violence and instability.

The Shiite Muslim-dominated government of Prime Minister Nouri al-Maliki is riddled with corruption, divided and often dysfunctional. Resentment over their political marginalization continues to simmer among the Sunni minority that ran Iraq during Hussein’s days.

Some Sunnis are urging secession, or at least a state-within-a-state similar to the Kurdish-controlled zone in northern Iraq.

‘They threaten the use of that militia if they don’t get their way,” Maj. Gen. Jeffrey Buchanan, chief spokesman for the U.S. military in Iraq, said of the Sadrists. “It’s an affront to Iraq’s sovereignty. And potentially what you have is a government within a government.”

The violence also goes on. By some estimates, an average of 30 bombings and other attacks occur each week, and about ten deaths a day. That death toll is roughly 20 percent of the daily toll during the worst days of sectarian warfare in 2006.

More than 100,000 Iraqi civilians have been killed, according to Iraq Body Count, a website tracking the war. About 12 percent died at the hands of American forces, and the rest in terrorist attacks, sectarian violence and extra-judicial executions.

The security of civilians is now the responsibility of Iraqi soldiers and police, now visible on virtually every major street in Baghdad, searching passing cars and patrolling avenues. More than a year ago, they took over security responsibilities after U.S. forces withdrew from Iraq’s cities.

With Americans gone, it is up to men like Corporal Hatim Abdul Kareem to help control the country’s endemic violence. He has his doubts. A Shiite Muslim, he lost a cousin to a sectarian killing. He fears more bloodletting after U.S. troops leave.

“After the Americans are gone, there will be war in the streets,” he said. “This is not just me saying this. Other soldiers are saying this. My family, my friends — they’re all saying the violence will get worse.”

For the administration, the departure fulfills President Barack Obama’s pledge to end U.S. military involvement in Iraq, a move polls suggest is supported by many Americans. As a candidate, Obama once called the Iraq conflict a “dumb war.” But the continuing violence and fears that Iran is usurping American influence in post-war Iraq — a scenario that critics forecast before Bush launched the invasion — has made the administration sensitive to political claims that it has “lost” Iraq.

As a result, the administration made great efforts to keep a significant troop presence in Iraq, conceding to the inevitability of full withdrawal only after the Iraqis refused to grant U.S. troops legal immunity to prosecution.

Even so, U.S. involvement in Iraq is not over. Earlier this week, al-Maliki met with Obama in Washington, where they pledged to proceed with a new — vaguely defined — “equal partnership” between the two nations.

Iraq has requested more U.S. military training, the details of which will be negotiated next year. Meanwhile, American military and civilian trainers with the Office of Security Cooperation at the U.S. embassy train Iraqis to use warplanes and tanks purchased from the U.S.
Iraq is now the fourth-biggest purchaser of U.S. military hardware in the Middle East.

“We need to stop thinking about Dec. 31 as the end,” said Colin H. Kahl, deputy assistant secretary of defense for the Middle East. “It’s not the end. It’s the beginning of a new, more balanced relationship with Iraq.”

But the fragility of Iraq’s security was symbolized by the venue for the American departure ceremony: a domed, glass-clad structure known as the Glass House.

The building near the Baghdad airport runway was a VIP lounge under Hussein. Many of the glass panels were shattered and its reception rooms lay in ruins after U.S. troops stormed the airport in 2003, but even today the building is patched with plywood and camouflage netting, and protected behind blast walls.

There was no mention during the ceremony of Hussein’s pursuit of weapons of mass destruction or his ties to al-Qaida — the Bush administration’s largely discredited reasons for invading Iraq in 2003.

Hussein had no such weapons. And he despised the Islamic extremism of al-Qaida, whose members only flowed into Iraq in the chaos following the American invasion.

In the brief ceremony, Gen. Ike Austin, commander of U.S. forces in Iraq, furled his flag, terminating his command. He recalled giving the command that sent the 3rd Infantry Division into Iraq in 2003 and the surge of U.S. forces in 2007 that he said helped stop the war’s “downward spiral.”

“Let me be clear: Iraq will be tested in the days ahead — by terrorism and by those who would seek to divide,” Panetta said.

But the Obama administration has adopted its own version of the Bush administration claim that the conflict was worth the cost because it helped free Iraq from Hussein.

Panetta and Austin were joined by Ambassador James Jeffrey and Army Gen. Martin Dempsey, chairman of the Joint Chiefs of Staff. Dempsey was the commander of the 1st Armored Division in 2006 when Sunni-Shiite violence erupted in and around Baghdad, leading to the toughest fighting of the war.