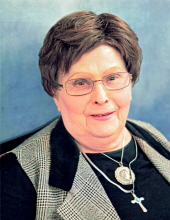 Visitation will be held one hour prior to the service time on Saturday at the Holy Transfiguration Greek Orthodox Church.

A Trisagion Prayer Service will be held at 8:30 a.m.

Interment will be held in Elmwood St-Joseph Cemetery.

Memorials may be directed the Holy Transfiguration Greek Orthodox Church in Mason City.

Maria Pattas was born on March 18, 1929, in the Evia Region of Greece, to parents Athanasios and Evangelina Triantifillou. She later moved to the United States settling in Mason City. She was united in marriage to Antonios Pattas and together the couple had two children Stella and James. In 1967 she and her family moved back to Greece returning to Mason City in 1968. Maria was a long-time member of the Holy Transfiguration Greek Orthodox Church, Daughters of Penelope and the Greek Orthodox Ladies Philoptochos Society.

Maria will be remembered for her loving nature, exquisite cooking, and the pride she took in instilling quality values into her children. She was well loved by the members of the community, family, and friends and will be greatly missed.

Maria is survived by her son, James Pattas; various nieces and nephews.