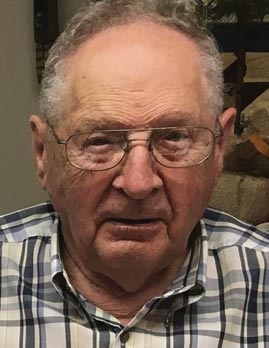 Virgil Clemence Juenger was born April 23, 1925 in Stacyville, Iowa to Joseph and Ida (Weber) Juenger. Growing up, he attended Visitation Catholic School through the 8th grade; leaving school to help on the family farm. Virgil served in the US Army during WWII. He married Louise Smith on June 5, 1956, at St. John’s Catholic Church in Johnsburg, MN. He worked for Stacyville CO-OP, retiring after 35 years of service. Virgil was a member of Visitation Catholic Church, Stacyville American Legion Post 569 and Catholic Order of Foresters. He was an avid bowler, enjoyed fishing, turtle fishing, playing cards and cribbage. Most of all he enjoyed spending time with family and friends, especially his grandchildren and great-grandchildren.

He was preceded in death by his parents; his wife, Louise in 2017; infant daughter, Rita; son-in-law Gary Schwieder; seven brothers and three sisters; and numerous brothers-in-law and sisters-in law.