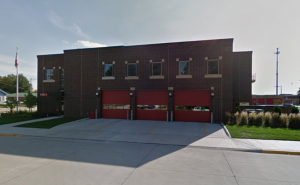 Once on scene it was determined a fire had started in a pot of grease on the stove top, but was extinguished before we arrived, by the sprinkler system that was activated by the heat in the condo.

There was moderate water, smoke and heat damage to the condo, along with water damage to common areas on the 3rd floor and floors below the effected condo. Everyone was able to evacuate, and no one was injured.