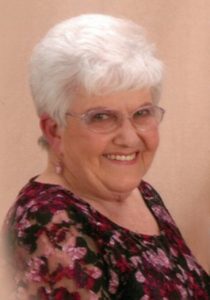 Rosella “Rosy” Geerts, 80, of Charles City, passed away Monday, October 30, 2017, at her home surrounded by her loving family.

A funeral Mass for Rosy Geerts will be held 10:30 a.m. Friday, November 3, 2017, at Immaculate Conception Catholic Church in Charles City with Reverend Gary Mayer celebrating the Mass. Inurnment will be at Calvary Cemetery in Alta Vista, Iowa at a later date.

Visitation will be at Hauser Funeral Home Thursday, November 2, 2017, from 5:00 to 7:00 p.m. with a Scripture Service beginning at 7:00 p.m. Visitation will continue one hour prior to the funeral Mass at the church on Friday.

Rosella “Rosy” Irene (Bennett) Geerts, the daughter of Alvin and Lillian (Betts) Bennett, was born on August 15, 1937, in Riceville, Iowa. In 1955, Rosy became a foster child of Doris and Bill Elliott of Charles City and the family moved to Davenport in 1956. Rosy graduated from high school in Davenport in 1957 and returned to Charles City in 1959.

Rosy was a waitress at the Riverside Café and at the Uptown Café in Charles City. She met Francis Geerts while working at the Uptown Café, and the couple was united in marriage on April 29, 1961, at St. Bernard’s Catholic Church in Alta Vista. They were blessed with four children.

Rosy continued waitressing until she and Francis started farming in 1965 in Deerfield Township, Iowa. Rosy also worked for Ron and Judy Gebel at the Nite-Lite, in the cafeteria at Sara Lee, Bluebird Tavern in Elma and at LeRoy Products in LeRoy, Minnesota. She and Francis owned and operated the Farmers Inn in Elma from 1984 to 1987. In 2005, Rosy and Francis moved back to Charles City in retirement.

Rosy was a member of the Rosary Society at St. Bernard’s and was the Vice President for two years. She was also a member of Immaculate Conception Catholic Church in Charles City.

Rosy enjoyed going to dances, traveling to casinos and going to Lansing with Doris Haskovec and spending several days at her trailer. She loved to have fun with family and friends and listen to older country music and classic Rock & Roll. Rosy was a great cook who took great pride in her baked goods and homemaking. She was a lot of things in life, but always a wife, mother, grandmother and homemaker first.

She was preceded in death by her parents and three brothers: George, Frederick and Stanley (in infancy) Bennett.