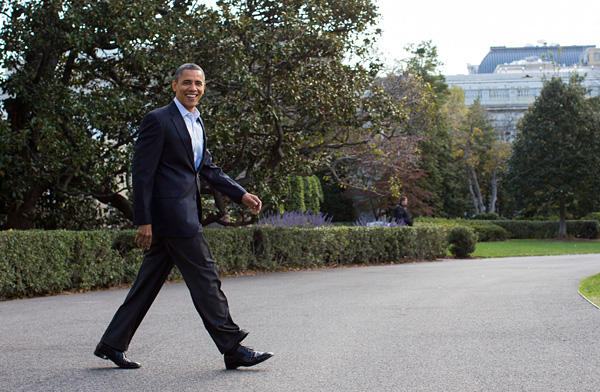 CONCORD, N.H. — President Barack Obama’s campaign isn’t nostalgic just for 2008. As it blew through New Hampshire 48 hours from Election Day, it was pining for the’90s.

Former President Bill Clinton, the only Democrat since Franklin D. Roosevelt to be elected to the office twice, joined Obama on the stump for what would be only the second – but the last – time of the campaign. The two men with the short and choppy history focused narrowly on the future.

“I’m not ready to give up on the fight,” Obama told the crowd as he asked for their vote one last time.

“Folks, the hour is late and time is short,” Clinton said.

The joint appearance was staged at the scene of one of their epic battles. The podium sat just yards away from a large historical marker honoring New Hampshire’s first-in-the-nation presidential primary, a contest Obama lost to Hillary Rodham Clinton — more than four years ago.

That history was not forgotten but quickly dismissed Sunday, with both presidents preferring to emphasize their common causes. Clinton, whose voices has grown hoarse as he hustles across the country for Obama’s re-election, noted that he worked hard four years ago, but that the stakes are greater today, he said.

“I’m much more enthusiastic now than I was then,” he said.

The former president has an even longer history with New Hampshire voters than he does with Obama. This was the state that resurrected his campaign in early 1992 after accusations of womanizing and avoiding the Vietnam War draft. He campaigned relentlessly, vowing to stand with voters “until the last dog dies.” He crowned himself the “Comeback Kid” after a second-place finish to next-door Sen. Paul Tsongas of Massachusetts, whom he breezed past for the nomination.

On Sunday, Clinton delivered a long explainer of a speech, one of the sort some Democrats believe he perfected at the Democratic National Convention and the president never did. Clocking in at about 25 minutes, he spoke a few minutes longer than Obama. And it was Clinton’s first campaign song, Fleetwood Mac’s “Don’t Stop,” not Obama’s usual Bruce Springsteen that blared as the president ended his speech.

Despite falling to Hillary Clinton in the primary, Obama won New Hampshire in the 2008 general election by nearly 10 percentage points. But now the president is even with former Massachusetts Gov. Mitt Romney. The WMUR Granite State Poll, conducted by the University of New Hampshire Survey Center late last week, put the race at 48 percent for each candidate. But it also pointed to signs of potential trouble for Obama. Independents in the state, a large part of the New Hampshire electorate, appeared to be moving to Romney’s corner – 54 percent said they back him, compared with 32 percent who support Obama.

The battle for independents had Obama and Clinton hitting notes of bipartisanship, talking about reaching across the aisle and promising to move what has been immovable gridlock in Washington.

Obama touted his administration’s work managing the federal response to Hurricane Sandy, noting his work with leaders from other party and promising to stand with storm victims.

“As long as I’m president I will work with anybody of any party,” Obama said.

Clinton praised Obama’s decision to step off the campaign trail and on the Sandy response to work with Republican Gov. Chris Christie and New York Mayor Michael Bloomberg, a Republican-turned-independent.

“It was a stunning example of how ‘We’re all in this together’ is a way better philosophy than “You’re on your own.’” Clinton said.