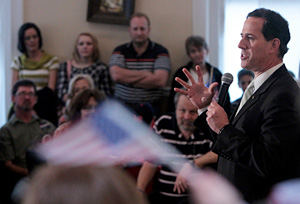 GULFPORT, Miss. — With the Alabama and Mississippi primaries two days away, Rick Santorum and Newt Gingrich tussled on Sunday over which Republican presidential hopeful would adhere most faithfully to conservative orthodoxy on fiscal restraint, health care and oil drilling.

They also took swipes at rival candidate Mitt Romney, whose heavy advertising has made Tuesday’s contests in the Deep South fiercely competitive despite the cultural dissonance between the former Massachusetts governor and both states.

Santorum, whose calling card with the South’s evangelical Christians has been social issues, attacked Romney’s record on abortion and contraception. Campaigning on a gloomy day in this town on the Gulf Coast, Santorum pondered the irony of Romney and Gingrich questioning his conservative credentials.

“I hear this all the time — ‘You’re too conservative to be able to win a general election’ — which is sort of funny because all of my opponents are attacking me here in Mississippi for not being conservative enough,” Santorum told supporters at a Gulfport restaurant rally.

Also added to the mix on Sunday: a provocative new Gingrich TV ad airing in Alabama. Gas prices, a narrator says, “didn’t go down when Obama bowed to Saudi oil princes.” It shows an image of President Barack Obama — a Christian some believe nonetheless to be Muslim — bowing ceremonially to Saudi King Abdullah, who was wearing an Arab headdress and robe. (Obama was meeting with the king as his predecessors have; President George W. Bush once walked hand-in-hand with the king and kissed him.)

The ad goes on to show a white man with his hands up, as if being mugged at gunpoint, with an unseen assailant poking a gas pump in his back. “The Gingrich $2.50 plan stops the great gas holdup and puts money back in your pocket,” the narrator says of the former House speaker’s pledge to cut gas prices to $2.50 a gallon.

Gingrich’s previous attacks on Obama have sparked accusations that he was exploiting bigotry against African Americans. In the days before South Carolina’s primary in January, Gingrich’s closing TV ad called Obama a “food-stamp” president. Discussing welfare two weeks ago in an address to Georgia’s Legislature, Gingrich promoted his call for enhancing “states’ rights,” an appeal fraught with racial symbolism in a region where for generations that was the rationale put forth to justify segregation and slavery.

Losses in Mississippi and Alabama on Tuesday could effectively kill Gingrich’s candidacy. The only states he has won are South Carolina and Georgia, and his campaign’s success is premised upon further victories in the South. For Santorum too, the two states are critical to establishing him as a viable conservative insurgent against Romney, who holds a substantial lead in delegates for the nomination.

Both men touted their desire for more domestic oil drilling on Sunday, but Gingrich slammed Santorum for his fiscal record as a former senator from Pennsylvania, saying his rival “ran up” a $1.7 trillion deficit.

“On economic issues, I am much, much more conservative than Senator Santorum,” Gingrich said on CBS News’ “Face the Nation.”

As for his uphill battle to revive his once high-flying candidacy, Gingrich said he was “playing catch-up” to Romney, which he ascribed to Romney’s better-funded campaign. He called Romney a weak front-runner with scant support from the party’s conservative base.

On NBC’s “Meet the Press,” Santorum said Romney had outspent him 10-to-1 and rallied the GOP establishment yet “can’t close the deal” with the Republican rank and file. It’s untrue, he said, that Romney holds an insurmountable lead in delegates, citing a convoluted nominating process with “a tremendous amount of dynamics.”

In Mississippi, where he campaigned Sunday in Tupelo and Gulfport, Santorum defended his fiscal record.

Obama, he told the crowd in Gulfport, “is exploding the size and scale of government, all because he believes that he and his friends, his czars, are smarter than you are, and should run your life, because we need to trust the elites, the planners, more than we trust the average people in America, who aren’t as well-educated or well-bred.

“Ladies and gentlemen, that elitist attitude is what we revolted against in 1776,” he said.

Turning to Romney and Gingrich, he attacked both for supporting steps to address climate change, saying, “Hook, line and sinker, they bought man-made global warming.” But once they were candidates for the GOP presidential nomination, he said, “guess who, like a well-oiled weather vane, changed?”

He also said Romney was “having a lot of trouble telling the truth” about his Massachusetts health care plan covering abortion and contraception, including “the morning-after pill.”

Romney, who plans to return to Alabama on Monday morning, took a break from campaigning on Sunday. Romney spokesman Ryan Williams said Santorum was “resorting to dishonest attacks to distract from his flailing campaign.”

“When Washington politicians like Rick Santorum get desperate, they result to false attacks like these,” Williams said.