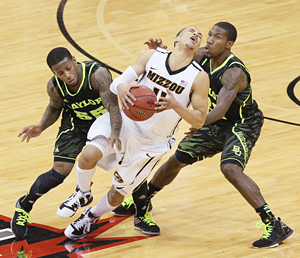 KANSAS CITY, Mo. — Fifth-ranked Mizzou made its final Big 12 tournament one that will last in Missouri lore, swarming No. 12 Baylor, 90-75, to claim its second tournament title in four years just as it prepares to leaves for the Southeastern Conference this summer.

(PHOTO: Missouri’s Michael Dixon Jr., middle, is fouled by Baylor’s Pierre Jackson in the final minutes of play in a 90-75 Missouri win over Baylor in the Big 12 Championship game at the Sprint Center in Kansas City, Missouri, on Saturday, March 10, 2012.)

With a crowd at the Sprint Center compelled to chant “SEC” near game’s end Saturday, the second-seeded Tigers fended off fourth-seeded Baylor’s comeback hopes by hitting 11 of their last 12 free throws.

“It feels amazing. We came here and did what we set out to do and proved once and for all that this is our city,” said Missouri senior guard Kim English, who was named the most outstanding player of the tournament.

As he spoke, English looked to coach Frank Haith, standing nearby on a ladder taking his snips at the net.

“That should be the national coach of the year up there,” he said, adding, “We are an extension of him.”

Whether the title added enough to the profile of Missouri (30-4) to become a No. 1 seed in the NCAA Tournament for just the second time in school history remains to be seen, but the Tigers should be in the debate as the tournament committee puts its bracket together for the announcement late Sunday afternoon.

As they celebrated on a podium after the game, not surprisingly the Tigers endorsed the idea, parroting the active crowd’s chant of “One Seed.”

Asked afterward if the idea was about a plea for the easiest path to the Final Four, English said, “Easiest path, not at all. It’s the respect factor. We went 30-4 and … we eventually came here and took care of business.

“Joe Lunardi (the bracket guru for ESPN), if you’re watching, look out for us.”

In fact, minutes after the game Lunardi posted his latest predictions and still had Mizzou a No. 2, with Kentucky, Syracuse, North Carolina and Big 12 regular-season champ Kansas pegged as the top seeds.

For that matter, he had Missouri as the third No. 2, behind Michigan State and Ohio State.

For his part, Haith declined to enter the fray.

“I’m not like the guys,” he said, smiling and adding, “That stuff will work itself out.”

Just the same, he confessed to a preference for where Missouri will be assigned for the first and potentially second weekends of the tournament.

Whatever Missouri is to be, it will go into the tournament propelled by the momentum of five straight wins to end the season — including the finale of its season sweep of Baylor (27-7).

English scored 19 points to lead five Tigers in double figures as Missouri hit 28 of 52 shots from the field — 53.8 percent, just another sterling shooting game in an arena where Missouri had shot 57 percent in four previous games this season.

English, who had sustained a thigh ailment that briefly knocked him out of Friday’s game with Texas, hit six of 10 field goals Saturday to finish 26 of 33 in the three games.

Michael Dixon hit 10 of 11 free throws and Marcus Denmon six of six as the Tigers made 25 of 31 in the game, and Phil Pressey had eight assists before the announced crowd of 19,006.

Staked by nine early points by Denmon, Missouri went into halftime leading 43-37 after making 15 of 28 shots from the field as Baylor hit just 16 of 36.

Missouri took its first double-digit lead with back-to-back buckets by Ricardo Ratliffe and Pressey to open the second half, and thus began an ebb and flow in which Mizzou never quite put it out of reach and Baylor never quite got in it.

The Tigers opened a 56-42 lead but Baylor repeatedly got just under double-digits away and wouldn’t concede even after an English 3 made it 75-62 with just under 5 minutes left.

The Bears closed to 75-65 on two Deuce Bello free throws with 4:06 left when Ratliffe fouled out, and after Pressey missed the front end of a one-and-one free throw situation A.J. Walton went to the hoop to make it 75-67.

At the media timeout with 3 minutes 21 seconds left, Missouri felt wiped out, down to six regulars left with English and Denmon (ankle) nursing injuries.

“I mean, we were tired and hurt,” English said. “Marcus’ ankle was purple. My thigh was killing me. I had a big gash on the back of my head.

Still, after Pressey missed another front end, Baylor cut it to 77-72 on two Quincy Acy free throws with 2:20 left.

But Baylor couldn’t generate any offense, and Mizzou made 10 straight free throws — including four by Pressey — and 11 of its last 12 to put the game away.