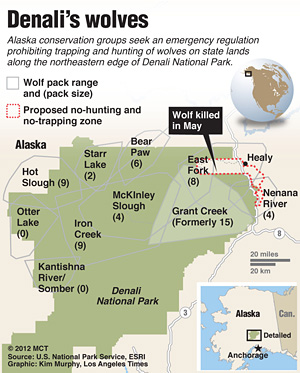 Map of Alaska locating Denali National Park; conservationists are seeking regulation to prohibit trapping and hunting of wolves on the northeastern edge of the park.

SEATTLE — The Alaska Board of Game has refused to consider a request to establish an emergency no-hunting zone for wolves on the edge of Denali National Park, a buffer sought after the park’s best-known pack lost two of its prime breeding females and largely disappeared from public view.

The issue has consequences for tourism — viewing wolves in the wild is one of the premier attractions at the 6-million-acre park — but state officials say a ban on hunting and trapping on the edge of the park is not necessary to protect the substantial numbers of wolves that still roam the park.

“The department did not have any biological concerns regarding the wolves in that area,” Kristy Tibbles, executive director of the Board of Game, told the Los Angeles Times on Wednesday. She said six of the board’s seven members who were reachable elected not to convene an emergency hearing on re-establishing a buffer on the northeast edge of the park.

Two buffers totaling 122 square miles protected wolves just outside the park for about a decade, but the board canceled the zone in 2010 when wildlife advocates sought to expand it. Board members said then they would not revisit the issue before 2016.

A coalition of wildlife groups sought to re-establish a protection zone following the death earlier this year of the two leading females of the Grant Creek pack, one of the park’s signature attractions and visible for years near Denali’s main road.

One of the females was killed by a trapper not far from the park, in the former buffer zone; the other died of natural causes. The pack had no surviving pups this year and has dispersed, with few visitor sightings over the summer.

Conservationists who sought the emergency buffer zone said Denali’s wolves — about 70 in nine packs — are at their lowest population in years.

“It is a shame that a small group of gubernatorial appointees is allowed to determine — behind closed doors and with no public input — the fate of such a treasured national resource,” Tina Brown, president of the Alaska Wildlife Alliance, said in a statement.

Conservation biologist Richard Steiner, who helped draft the petition, said the board concluded that no “emergency” existed to warrant the re-implementation of a buffer zone.

“In their definition of ‘emergency,’ every last wolf in Denali National Park could be wiped out, and still would not constitute an emergency to the state wolf population,” Steiner said in an email to the Times. “The state’s Neanderthal policy on wildlife management is moving closer and closer toward anyone can kill anything, anywhere, anytime, and with any method they so please.”

The National Wolfwatcher Coalition, which leads wolf-viewing trips in Denali, said in a letter to Alaska Gov. Sean Parnell that it has canceled several scheduled wolf-watching expeditions to Denali after being informed it was “highly unlikely” they would see the Grant Creek pack or other packs at the park.

“Several other nonprofit organizations who were interested in partnering with us to provide similar experiences were contacted and made the same decision,” the group’s education and resources director, Diane Bentivegna, said in the letter.