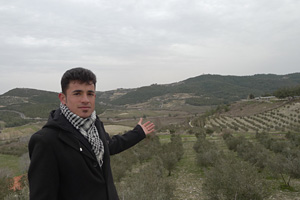 ON THE TURKISH-SYRIAN BORDER — The Syrian military in the past month planted a band of anti-personnel mines along stretches of the border with Turkey, where last year more than 10,000 Syrian refugees fled the Assad regime’s crackdown on the “Arab Spring” uprising, Syrian witnesses said.

(PHOTO: Tamar Fizo, 20, points to the area where the Syrian army planted a minefield in mid-February. Just to the right of his hand is where refugees used to cross in. His home village, Khirbet al-Joz, Syria, is just to right of his face.)

After a family of five was reportedly injured severely in a new minefield last month, Syrian civilians, operating with primitive means — an ax, a rope and the guidance of a volunteer who had mine-clearing training in military service — unearthed hundreds of those mines and reopened the way to safety, volunteers said.

The mines were Russian made PMN-2 pressure mines. They consist of a green plastic casing and a black cruciform-like pressure plate, which detonates the charge inside. They were laid about a foot apart in two bands that were set about two feet apart, just three or four yards from the fence that marks the border with Turkey, according to the volunteer who directed the mine-clearing operation.

Tall and slight of frame, the volunteer, 28, who called himself Rajol al Hadidi, (“Iron Man”), left Syria one week ago carrying more than a dozen mines. He crossed into Turkey to seek the advice of military defectors in the Free Syrian Army on how to defuse the mines.

“I know 10 sorts of mines — anti-personnel mines and anti-tank mines, but not this one,” he said. “We didn’t know what explosive material was contained in it, but we thought it would create a crater of 3 or 4 meters,” he said.

But they were not able to advise him. In a meeting about a half mile from the Syrian border, Hadidi allowed a McClatchy reporter to photograph one mine — still fused — that he had removed from the new minefield.

Some mine experts consulted by McClatchy said there is no way to defuse the PMN-2 other than to detonate it with a small explosive charge. British expert Andy Smith said the PMN-2 is one of the most common mines in the world, costing as little as $10 each.

Smith said PMN-2s usually maim and dismember, but rarely kill unless victims cannot get to medical facilities within hours. He said Syria most likely has a stockpile opf the mines, provided by Russia or the former Soviet Union. Turkish mine experts said the Soviet-built mines have never been in the Turkish inventory.

Hadidi said he removed the first mine, using a technique he had learned in the military — placing the blade of an ax in front of the mine, attaching a 70-foot rope, and tugging at the ax to ease the mine out of the ground. When he saw that moving the mine did not detonate it, he trained four other civilian volunteers in mine removal, and together they lifted an estimated 300 mines, he said.

The Syrian military had planted the mines in early to mid-February in olive groves for more than a mile along the border near Jisr al Shughur, Hadidi said. It was through this area that at least 10,000 residents of the town fled to Turkey last year, fearing an all-out onslaught by the government of President Bashar al Assad.

Mines were also planted about 12 miles to the north, in Guvecci, according to Syrian army defector Tamar Fizo, who witnessed the mine-laying. This was a secondary crossing point for refugees fleeing Assad’s Syria into Turkey, but is no more.

“We saw soldiers getting off trucks or armored cars and planting mines 20 meters (70 feet) from the border,” he said. The night after the minefield was laid, a wild boar detonated one and died, he said.