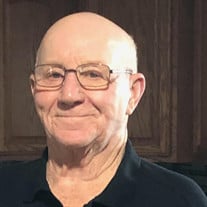 Steven Jon Miller, son of Herbert and Phyllis (Zaugg) Miller, was born on October 29, 1948 in West Bend, Iowa. He graduated from West Bend High School in 1966. After graduation, Steve volunteered for the Iowa Army National Guard. He served until 1972. On April 18, 1969, Steve was united in marriage to Carol Ann Higgins at Sts. Peter and Paul Catholic Church in West Bend. Throughout his life he farmed, worked for Miller Bros Trucking, West Bend Elevator/MaxYield Coop, and Cylinder Elevator/Stateline Coop until his retirement in 2014. In the years since his retirement Steve has enjoyed spending time with his wife, kids and grandkids, gardening, working in his wood shop, farming, golfing and puzzles.

Steve was a member of Sts. Peter and Paul Catholic Church, member of the Knights of Columbus and volunteered for the West Bend Fire Department for 10 years.

The 4th of July was one of Steve’s favorite holidays to spend with his family. In Steve’s honor, the family welcomes donations to the West Bend Firework Display. These donations may be dropped off at West Iowa Bank or mailed to West Bend Iowa Chamber of Commerce (Firework Display) PO Box 366, West Bend, Iowa 50597.