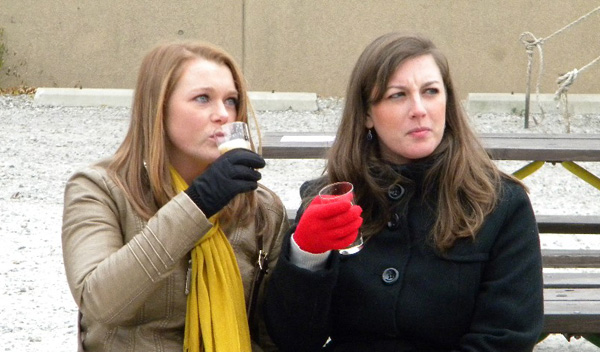 Casey and Aimee Mussman were doing a home-brew demo of Whitehouse Honey Porter, “It’s the same beer President Obama has his cooks make at the White House,” said Aimee, while Casey was cooling down the hops.

Collective Spirits, out of Albert Lea, donated the supplies for the demonstration.  “It’s the only Beer and Wine Kits & Supply store in the area,” said Brian Davis, who is a Charter Member of Iowa-Minnesota Society of Brewers or SOB.

“We are having a drawing for a free Brewer’s Best Beer Brewing Equipment Kit,” said Aimee, who showing off the different ingredients that go into home crafted brewed beer.

“It’s a pretty good turn-out,” said Davis, “but probably would have had more people if it were about twenty degrees warmer.”