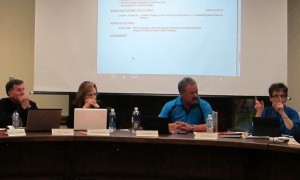 The consent items on the agenda were approved unanimously.

Other appointments to boards were made.

Board meetings were set for the third Monday of each month at 5:30 PM.

Dave Nagel made a presentation on “Data teams.”  The school district is participating in a program from the Leadership and Learning Center using a three-person Data Team, or “coaches” that were trained by Nagel.

The program supposedly “validates their professionalism and gives them tools” to succeed.

“Certification training is tailor-made for schools and districts that wish to increase their capacity to offer on-site, sustainable staff development,” the Leadership and Learning Center website claims.  “By training your own cadre of staff developers via The Center’s certification training, your school or district can save money while working toward raising student achievement.”

The Leadership and Learning Center says it “is the professional development and consulting services division of Houghton Mifflin Harcourt, a leading global education organization.”

Assistant Superintendent of Administrative Services Hal Minear provided the Board with a preliminary report of the beginning enrollment numbers for the 2012-2013 school year.  No concrete figures would be available for a few weeks, but he used the word “down” more than once.

A 28E agreement between Area Education Agency 267 and the Mason City Community School District for management and operation of the Four Oaks Behavior Program was approved.

Chief administrator of AEA 267 Roark Horn said the program would be “revenue neutral” and not cost the school district anything other than some basic administrative costs which the district already is involved in.

Executive Director of Business and Financial Services Ramona Jeffrey presented information requesting approval of modified allowable growth and supplemental aid for special education services.  It was said that “transportation costs went up” and that there were special education cost overruns due to the Federal Government not covering costs as they had promised.  These factors contributed to create a negative special education balance of $295,793.58.  “That’s our negative special ed. balance,” Jeffrey said.  “We spent that much more than we took in for the number of special ed. students that we have.”

Watch video highlights of the meeting:

Leave a Reply to Be Human Cancel reply