US vows ‘justice’ for consulate attack in Libya 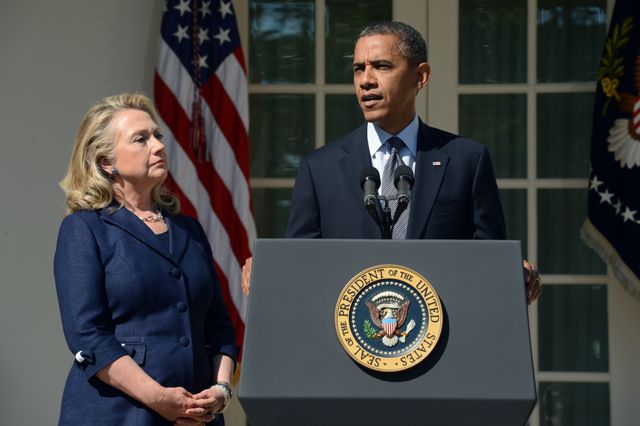 CAIRO — The attack on a U.S. diplomatic post in eastern Libya that killed the U.S. ambassador and three other Americans was carried out by a small group of militants who arrived late at night, unleashed a fusillade from AK-47 rifles and rocket-propelled grenades, then torched and ransacked the building, according to witnesses and U.S. officials.

U.S. officials said the two-hour assault on the U.S. Consulate in Benghazi appeared planned and “complex,” rather than a spontaneous outbreak of mob violence in reaction to an online video, purportedly produced in the United States, that mocks the Muslim Prophet Muhammad. The video had prompted protesters to scale the U.S. Embassy walls in Cairo earlier Tuesday and tear down an American flag.

President Barack Obama vowed to work with Libyan officials “to bring to justice the killers,” and ordered security beefed up at U.S. diplomatic missions around the world. The Pentagon sent about 50 Marines from Spain to help guard the embassy in Tripoli, the Libyan capital. The Pentagon is also moving two warships toward the Libyan coast.

The dead included J. Christopher Stevens, 52, the first U.S. ambassador killed in the line of duty since 1979, and Sean Smith, a State Department information officer and Air Force veteran. The identities of the other two slain Americans were being withheld pending notification of their families, officials said.

For the Obama administration, the assault cast a shadow over its support of the “Arab Spring” uprising that overthrew Libyan strongman Moammar Gadhafi in August 2011.

Fledgling democracies across the region are struggling to tame dangerous political rivalries and manage movements that have long been suspicious of the West. A new, democratically elected government in Tripoli has sought to exert authority over Libya’s scarred, tribalistic society.

The image of the burned consulate was a sharp contrast to scenes of euphoria in Benghazi, the cradle of the revolt against Gadhafi, when NATO intervened last year. Then, outdoor prayer services were often decorated with the flags of the U.S. and other NATO countries.

Since then, however, the rivalry between eastern and western Libya has intensified. And Islamist militants long suppressed by Gadhafi, especially in Benghazi and other parts of eastern Libya, have reportedly grown in influence.

Libya’s parliamentary elections in July were largely peaceful, and the Muslim Brotherhood finished a distant second in the balloting. But analysts have warned that radical Islamist groups have been looking to exploit a security vacuum.

In recent months, as many as 14 Gadhafi regime figures have been assassinated and Sufi Muslim shrines — viewed by many Islamic extremist groups as heretical — have been destroyed, with no one brought to justice.

“This shows the problem that we in Libya still face: There is no police force that can control the country. No central authority can control all these different armed, militant groups,” said Mohammed K. Arab, head of political science studies at Tripoli University. “Until we do, we will see continued instability.”

“It is political turmoil that provides militant groups with room to operate, and the uncertain handling of parts of the Libyan transition might have come back to haunt us,” said Sean Kane, a political analyst who has worked in Libya for the Center for Humanitarian Dialogue, a Geneva-based nonprofit group that promotes conflict resolution.

Sen. Bill Nelson, D-Fla., a member of the Senate Intelligence Committee, said the attacks bore the hallmarks of an al-Qaida operation and called on the committee to investigate “what role al-Qaida or its affiliates may have played in the attacks in Libya and Egypt.”

Witnesses in Benghazi said a small crowd gathered Tuesday night outside the consulate, a villa in a walled compound, to protest the anti-Muslim video, which was disseminated online by Morris Sadek, an Egyptian Christian activist in suburban Washington, D.C. Some in the crowd had learned of the protest through Facebook. Others had heard of the video from Libyan students abroad or seen TV images of the Cairo protest.

About 10 p.m., Abdel Monem Monem, a former adviser to the leader of the rebels’ transitional government, went to check and found about 50 people demonstrating without violence.

“It was normal. We were just showing (the Americans) not to insult our Prophet Muhammad,” Monem Monem said.

About 11:30 p.m., armed men drove up in about 20 cars bearing Islamic slogans. Sheik Mohamed Oraibi, a young Islamic preacher of the hard-line Salafist movement who was involved in the peaceful protest, watched as what he called “religious extremists” armed with Kalashnikov assault rifles and rocket-propelled grenades arrived and began firing at the consulate. He said he didn’t believe they were affiliated with al-Qaida.

The compound’s security guards fired into the air to try to disperse the attackers, but the attackers fired back with “ridiculous amounts of gunshots,” Oraibi said.

Fire gutted the compound, according to U.S. officials, and sent U.S. personnel running for safety.

“It’s still very confused,” said a former CIA officer who has spoken with colleagues. “The (American) staff fled into the city and many are unaccounted for. It’s a mess.”

Senior U.S. officials, briefing reporters in Washington on condition of anonymity, said the assailants breached the security walls and fired their weapons, setting the consulate ablaze. The consulate and a separate annex used by U.S. personnel were each protected by Libyan guards and “a robust American security presence,” the official said, declining to provide further details.

The annex, with 25 to 30 other staffers inside, was also under attack. It took about an hour and a half for security personnel to regain control of the consulate and another three hours to completely drive off the attackers, the official said.

The officials said the two other Americans who died were inside the annex and that another two there were wounded.