Stevens remembered as a man who cared deeply for Libya 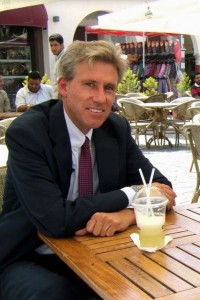 In this July 4, 2012, file photograph, U.S Ambassador to Libya Chris Stevens is seen during an interview with a team of Libya Hurra TV. Stevens was killed in an attack on U.S. consulate in Benghazi, Libya, on September 11, 2012.

By Anita Creamer, The Sacramento Bee –

SACRAMENTO, Calif.—After a recent break from work – which included a conference in Germany, a wedding in Sweden and a visit to Vienna – U.S. Ambassador J. Christopher Stevens e-mailed his family in Northern California that he’d arrived back in Libya.

“He just got back to Libya a few days ago,” said his brother, Tom Stevens, 46, an attorney who lives in the Bay Area town of Piedmont. “He sent an email saying he had a lot of work waiting for him, so he’d have to e-mail more later.”

And then came the tragic news. On the 11th anniversary of the Sept. 11 attacks, the 52-year-old Stevens and three other embassy staff members were killed in an attack on the consulate in Benghazi, the city that as envoy Stevens helped guide through the violent Libyan uprising this spring.

His stepfather, Robert Commanday, told CNN that Stevens loved the Libyan people and was passionate about helping the country recover from its revolution.

“He was a brilliant public servant who died in the city he helped save,” said his longtime friend, Paul Feist, a California Community Colleges vice chancellor who met Stevens when they were students at Piedmont High School.

A day after Stevens died, his family and friends remembered him not just as a dedicated career foreign service officer whose death merited an outpouring of tributes from the White House, the State Department and his alma maters, the University of California, Berkeley and Hastings School of Law — but also as a smart, amiable, unflappable man with a gift for caring about the world around him.

He loved playing tennis, and he played it around the globe, using the tennis court as a way to get to know other diplomats, his brother said. He loved running, and he ran everywhere.

“He even ran on the dangerous streets of Tripoli, with his security detail running with him,” said Tom Stevens.

Locally, some remembered Chris Stevens as the boy who long ago attended Pioneer Elementary and Emerson Junior High in the city of Davis, where he joined the ski club and played saxophone in the stage band.

“He was a cute blond guy who was very active in school,” said Cathy Speck, who was a year ahead of Stevens at Emerson. “He was definitely a friendly guy, not somebody who stayed on the sidelines.”

And some remembered him and his siblings, Tom and Anne, now 49 and a doctor in Seattle, as polite kids who played for hours outside with the other children in their South Davis neighborhood of sprawling ranch houses and wide lawns.

“The whole family was very nice,” said Rosie Cushing, who lived three doors down from the Stevens family in the late 1960s.

Chris Stevens was born in Grass Valley in 1960 and spent his early years in Marin County. By the end of the decade, the family had moved to Davis, where they lived until his parents divorced in the early 1970s.

He is the son of retired California senior assistant attorney general Jan Stevens and his wife, Carole, who live in Loomis, as well as cellist Mary Commanday and her husband, Robert, who live in Piedmont.

He is also survived by a half-sister, Hilary Stevens, 32, a doctor who lives in Stockton.

“Chris was always a lot of fun,” said family friend Mary Sparks, who lives in Loomis. “He was a very observant man with a great sense of humor. He had a quiet side, and he really loved his work. It’s such a loss.”

When he came home to Northern California from his postings around the Middle East — Saudi Arabia and Syria, Jerusalem and Tripoli — Stevens made a point of visiting everyone, from the Bay Area to Stockton to the foothills.

“He’d always come to Stockton to see us,” said Feist. “We’d try to pump him for information about the excitement of his life and career.

“He was such an unpretentious guy. He’d want to know about your son and how he was doing in school. He was a remarkable man.”

Not quite 25 years ago, the never-married Stevens stood up for Feist as best man at his wedding — and only a few years ago, he filled the same role when his father married Carole Cory, his third wife.