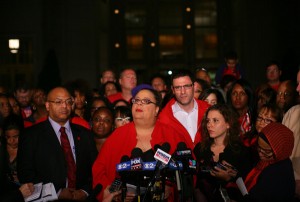 “We have failed to reach an agreement that will prevent a labor strike,” Chicago Teachers Union President Karen Lewis said. “No CTU members will be inside of our schools Monday.”

After an all-day negotiating session Sunday, School Board President David Vitale told reporters the district had changed its proposal 20 times over the course of talks and didn’t have much more to offer.

“This is about as much as we can do,” Vitale said. “There is only so much money in the system.”

The district said it offered teachers a 16 percent pay raise over four years and a host of benefit proposals.

“This is not a small commitment we’re handing out at a time when our fiscal situation is really challenged,” Vitale said.

Lewis said the two sides are close on teacher compensation but the union has serious concerns about the cost of health benefits, the makeup of the teacher evaluation system and job security.

With a strike, CPS will put its contingency plan in effect, opening 144 schools to students from 8:30 a.m. to 12:30 p.m. But parents are being urged to find alternatives and use the schools only as a last resort. The city’s 118 charter schools are not affected by a strike.

A strike culminates months of heated rhetoric between Lewis and Mayor Rahm Emanuel and his hand-picked school board.

Several sources said that sending Emanuel into negotiations to broker a last-minute deal wasn’t an option because there was too much bad blood between him and Lewis.

The 25,000 union members were told to report to their schools at 6:30 a.m. Monday to begin picketing. Several interviewed Sunday appeared more than ready.

“I think people feel like they’ve been bullied, so they want to say, ‘OK, let’s do this, let’s dance,’ ” said Jay Rehak, a union delegate and veteran high school English teacher. “We know a strike is really going to be painful. People will be hurt on both sides. But in the end, it’s like saying, ‘I’ll be bloodied and you’ll be bloodied, but at least you’ll know not to bully me again.’ ”

Contract talks started in November but had accelerated in recent days as Vitale, who brokered teacher contracts in 2003 and 2007, came to the table in an attempt to bridge the divide. CPS submitted new contract offers to the teachers union on Friday and Saturday, but neither was accepted.

A teachers strike is fraught with political peril for Emanuel and CTU leadership. Both risk angering thousands of working parents now scrambling to find places for children

The strike could cut against the narrative Emanuel is trying to craft as a leader who is a problem-solver moving the city forward. It also could set the tone for his somewhat fractured relationship with labor, with his first major union contract negotiation ending in a strike.

While the mayor kept close tabs on negotiations behind the scenes, Emanuel has maintained a relatively low public profile since returning from the Democratic National Convention late Wednesday, a trip he cut short.

The mayor hasn’t had a public schedule since last Tuesday, the first day of school for most Chicago Public School students. On Sunday afternoon, Emanuel was seen at a nonprofit’s fundraiser, where he took at least one question from a high school student who asked him whether she’d be in school Monday.

While teachers are expected to report to their schools Monday morning to begin picketing, union leadership is expected to remain at the negotiating table in the hopes that the work stoppage is a short one.

The last teacher’s strike came in 1987, when teachers walked off the job for a whopping 19 days. Before that, teacher strikes were relatively common — Chicago teachers walked out nine times between 1969 and 1987 amid biennial fights over salaries and working conditions.

That will come as little solace to parents Monday. At the 144 schools included in CPS’ “Children First” contingency plan, students will be provided with free breakfasts and lunches and participate in organized activities such as independent reading or writing. State law prohibits CPS from offering classroom instruction without certified teachers.