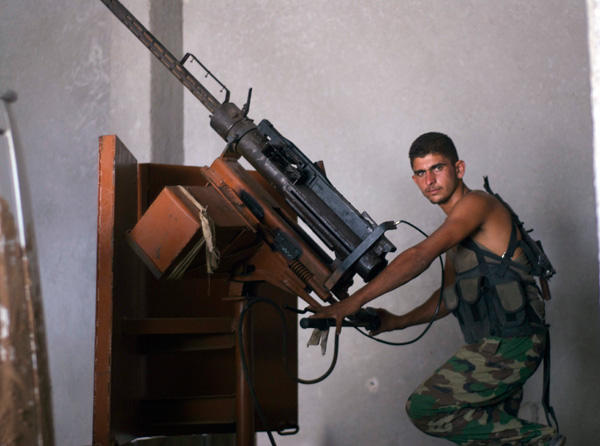 ABU AL-DAHOUR, Syria — Most of the civilians already have left this city of about 30,000, and many of those who remained could be seen Saturday piling trucks with their belongings.

Abu al-Dahour is the closest city to a military airport that bears the same name. Now it has become the setting for a strategic confrontation that rebels hope will undercut the military’s dominance of the air, an advantage that’s all but halted rebel advances in nearby Aleppo, Syria’s largest city, and allowed the military to move men and materiel where rebels’ roadside bombs have made land travel dangerous.

Ten days ago, the rebels fighting to topple the government of President Bashar Assad launched a two-day offensive against the base, overrunning a complex that housed air force officers. The government responded by bombing parts of the city to rubble. The rebels vowed, however, to continue to lay siege to the base.

They use garages in the city to hide truck-mounted anti-aircraft weapons, which they’ve used to down at least one air force jet. They also have at their command captured armored personnel carriers, at least one tank and ammunition they seized during the brief time they occupied parts of the base.

The rebels, of course, predict victory. On the outskirts of the city, near a barn full of cattle, rebels from one of the groups that operate here, Syrian Martyrs Battalion, proudly displayed the wreckage of what they, and experts in the United States who viewed video of the wreckage, said was a Russian-made MiG jet fighter. They said they had downed two more aircraft last week and had destroyed other aircraft and a runway during their brief foray onto the base nearly two weeks ago. The assault was coordinated, they said, with a strike on another air base near Taftanaz, north of here, that also was being used to fly sorties over Aleppo.

Rebels say the anti-aircraft weapons they’ve captured have given them a new edge in their fight and have cut the number of sorties the government is flying.

But the government is still deploying aircraft. On Saturday, residents of a town near Abu al-Dahour looked pensively up into the sky as the sun set and a pair of helicopters high above delivered a dozen rockets at something in the distance. On Sunday in Aleppo, Czech-made L-39 trainer jets could be seen strafing and dropping bombs in a neighborhood in the northern part of the city.

“The attacks on the airport are just the beginning of our plan to get rid of the air force,” said Jameel Maarouf, the leader of the Syrian Martyrs Battalion. “We will continue.”