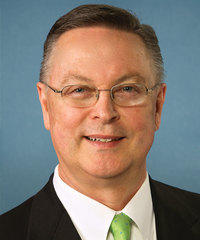 WASHINGTON, D.C. – President Donald Trump on Monday gave an endorsement to Iowa Republican Congressman Rod Blum, who is locked in a tense re-election campaign with his Democratic rival.

Rod Blum, serving his second term in Congress, is challenged by Democrat Abby Finkenauer, a state legislator from Dubuque. Polls show the race is a dead heat.

President Trump desperately seeks to keep his conservative allies in power, to further his agenda in “making America great again” and possibly fend off an impeachment attempt. To do that, he will need incumbents like Blum of Iowa’s First District to win on November 6th. To bolster Blum’s chances, President Trump tweeted on Monday, “Congressman Rod Blum of Iowa got a desperately needed Flood Wall for Cedar Rapids that was almost impossible to get. He makes a BIG difference for Iowa! Border, Military, Vets etc. We need Rod in D.C. He has my Strong Endorsement!”

Blum was recently under investigation for online business dealings. He has complained about attacks and vandalism to his campaign signs.